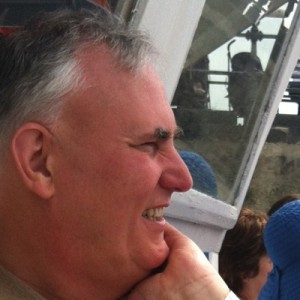 About Scott R. Larson:
Scott R. Larson was born and grew up in California’s San Joaquin Valley. He has also lived in France, Chile and for many years in and around Seattle, Washington. He currently lives in the West of Ireland where he writes one of the internet’s longest running film blogs.

What inspires you to write?
I have always expressed myself better by writing than by conversing. If I have views on current events or the arts, it is easier for me to blog than to sit around talking. And, like most people, I have a few stories in me. Mainly they are inspired by experiences I have had or events I have witnessed. I have lived through some interesting times: California in the 1960s and early 1970s, France and Latin America in the 1970s, the software boom in Seattle in the 1980s and 1990s. There are some really good stories there that I would like to tell.

Tell us about your writing process.
I do a lot of planning and writing in my head. When I am walking or driving, my mind starts working out stories. When I actually sit down to write I generally start at the beginning and write straight through to the end. Rarely I will write something out of sequence. For instance the ending to Maximilian and Carlotta Are Dead came to me one morning, even though I was only about halfway through the book, and I typed it out immediately. I hardly made any changes to those pages when I got to the end of the book.

For Fiction Writers: Do you listen (or talk to) to your characters?
It sounds weird, but yes. They become like friends. I suppose it’s inevitable because you spend so much time with them in your head. It’s fascinating the way they take on a life of their own. So much so that they sometimes do things that I hadn’t seen coming.

What advice would you give other writers?
It’s kind of trite but true. Write something every day. Even just a small amount. The longer you leave it, the harder it is to get back into it. Waiting for “inspiration” to come is a bad strategy. Even when I feel like my writing is uninspired, I am often surprised later that it turned out better than I had thought.

How did you decide how to publish your books?
I published my book myself after surveying the numbers of other authors out there and the numbers of self-published books that were finding audiences and making money. Unless you find a publisher that is really taken with you and wants to champion you, you’re going to end up doing all the grunt work of publishing and marketing anyway. I was in the fortunate position of having production and pre-press experience so it was fairly easy to do my own formatting, production and press prep. And I like having control over everything about the book.

What do you think about the future of book publishing?
That’s hard to say. A couple of months ago I would have repeated the conventional wisdom that print books would disappear and everyone would be reading e-books. But my experience so far has been that there is still a strong demand for print books and that readers, retailers, reviewers, etc. take you much more seriously if your book has a print edition. So I don’t think print is going away that fast after all.

What genres do you write?: Literary fiction, general fiction, coming of age, fantasy