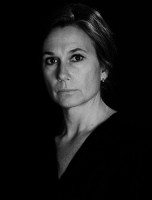 About Sandra Gustafsson:
I was born in Stockholm, Sweden in 1972. I grew up in a dysfunctional family and had some hard years before I knew what I wanted to do: work with children. So I studied and later on worked with children with or without diagnoses in special schools. One day I just knew I had to go back in my past and try to understand what had happened in my family. So, my first book was the autobiographical narrative The Dandelion Kid (2006), a book I presented in readings and conference discussions over the following seven years.
In 2006 the LEVA! newspaper listed me among that year’s 100 most inspiring persons, and in 2007 The Dandelion Kid was shortlisted for Stockholm novel of the year. In 2010 I published the psychological thriller Seared, in May of 2014 my second psychological thriller The Rival appeared and in August 27th 2015 my fourth book Skinless will be released.

What inspires you to write?
My three novels, Seared, The Rival and Skinless are all about children-parents relationship. I have to say that my childhood has inspired me, or maybe I just have a lot on my mind that I have to put down on paper. There are so many things that children experience that they never talk about, never dare to talk about. Things they just live with. And the parents, they are just grown up children, right, with a lot on their minds … So, you see, there is lots of stories out there.

Tell us about your writing process.
First: I write a lot of notes. A LOT. In my phone, on what ever paper that comes in my way. Then I write something down, a few pages, just let it all out. And then I think about it and then BOOM. I write all the time. Not until I am almost finished I start with the post-it notes. I write down the chapters with a little info on it, like “Chapter 7, X angry about the car”, and put it infront of me on the shelf. Then I can easily overlook and move around the chapters. I write on my laptop, in Word.

For Fiction Writers: Do you listen (or talk to) to your characters?
I try to put myself in their situations. Feel what they are feeling. Like, if I was very angry, almost like I would slap someone, how would I move, what would I say – or would I be quiet? How would my body react? Defensive? Hunched?

What advice would you give other writers?
Believe in your own writing tone! Don´t write in a special way because it is “how it supposed to be”. There is just as many readers as there a writers, so there is always someone who is going to LOVE your books. That does not mean you should not listen to your editor – please do – sometimes they say the most brilliant things. Just remember who you are as a writer.

How did you decide how to publish your books?
My two first books was published by a publishing house, and when they closed down I decided to self-publish with the help of a hybrid publisher. For me it was the same thing (accept now I´m paying for everything) because some of the staff from my publishing house were freelancers and started to work with the hybrid publisher. (Really, it´s a very small branch.)

My advice for new authors is to 1) be kind to people 2) don´t talk bad about people in front of people you don´t know, as I said: it´s a very small branch 3) if you´re having a contract in your hand – don’t just sign it – READ it. Twice. Even the small letters at the end and 4) follow your heart, because if it feels bad – it usually is.

What do you think about the future of book publishing?
I think the future is here! I love the ebook and the print on demand-thing, so easy! You don’t have to wait a year or maybe two to get your books out.

What genres do you write?: Suspense thrillers (but the first one is a autobiography)