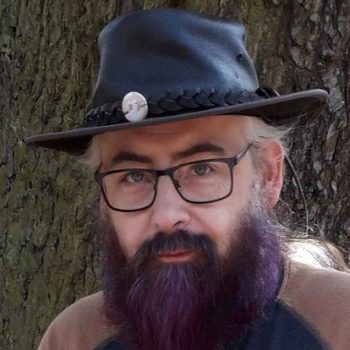 About S.D. Howarth:
S.D. Howarth is a British fantasy author, living in East Yorkshire with his wife, two children and two ungrateful cats with an endless yearning for food. By day, he works as an IT Manager. By night he writes (and edits) in the attic, finally getting some use out of his History & Nautical Studies degree from UCNW Bangor.

This is his debut fantasy novel, set within ‘The World of Sanctuary’ with a further two books planned in this series.
A previous short story, ‘Halidom’ from ‘Crater’, can be found in The Blackest Spells Anthology published by Mystique Press.

What inspires you to write?
I bypassed kids books at school and went straight into adult adventure books and military history. Since then I wanted to write novels. It was deferred it until an enforced break from computer gaming due to kids and health issues. I decided to seriously have at it after I dinged 40. Then the real learning process began in further research and the writing process.

Tell us about your writing process.
The bulk of my first manuscript was written up as a distraction while I was tripping on painkillers for a week after turning my foot into a Shrek foot.

My process is to pen down the basic concept, scene and general dialogue. Type it up into Scrivener and spend the next eternity polishing and tweaking it, between multiple formats and occasionally using text to speech.

It usually starts with an idea, grows in terms of worldbuilding and characters and evolves and deepens from there. Worldbuilding in the World of Sanctuary is a combination of 'what if' from history and myth, with a fantastical element held in check by ecology and medieval realism.

For main characters I rough out a general description, or image for consistency, or reference. You can go overboard on detail and worldbuilding, which is fine in your head, but tends to be chopped in edit when slowing pacing.

For Fiction Writers: Do you listen (or talk to) to your characters?
My characters sometimes talk to each other in the car to work. The challenge is remembering if they said anything sensible or humorous when I get there. Some of the best dialogue appeared that way and no doubt even pithier comments were lost.

What advice would you give other writers?
Obvious stuff… Write what you enjoy, read plenty – even in styles, or sub-genres you may not consider, and if you ask for criticism don't get the hump if it is critical. Take a break and come back to it objectively. You may disagree with the feedback, but can you rephrase it to work better?

How did you decide how to publish your books?
I've been editing my debut novel long enough to know a few authors and author groups and have an idea of the options. I tried the traditional route, had a couple of nibbles, but felt I was wasting my time. I had a solid plan B to put in place, and with the disruption of Covid that rolled over from last year to this year.

Advice to new authors would be expect things to take far longer than you might expect. Making contacts is pretty essential, even if for beta reading and bouncing ideas off someone.

What do you think about the future of book publishing?
The odd thing about Covid and lockdown was highlighting the need for interests to keep rolling people rolling on and what people can produce with the right skillset and tools. My reading habit had a fair split of Trad/Indie/SP authors over the last few years, but my music tastes spread further, particularly with talented cover artists.

With the growth of IT, particularly, Tablets, Smartphones and cloud software I think more than ever an individual can develop and produce a product as good as many printing houses, albeit without the marketing and sales options of a major publisher.

If my music influences can change over a year, so can my reading habits and I buy far more Ebooks, than print books and that doesn't involve being anywhere near a book store. I suspect more sales with go online and high street stores become more cafe's or boutique shops that go bust in a year. Online presences will become key.

What genres do you write?: Fantasy (various sub-genres) and Alternate Reality