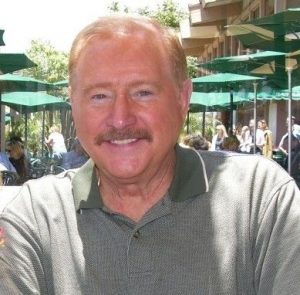 About Ronald E. Yates:
Ronald E. Yates is an award-winning author of historical fiction and action/adventure novels, including the popular and award-winning Finding Billy Battles trilogy. His extraordinarily accurate books have captivated fans the world over who applaud his ability to blend fact and fiction.
Ron is a former award-winning foreign correspondent for the Chicago Tribune and Professor Emeritus of Journalism at the University of Illinois where he was also the Dean of the College of Media.
His book, "The Improbable Journeys of Billy Battles," is the second in his Finding Billy Battles trilogy of novels and was published in June 2016. It has won multiple awards, including the 2017 KCT International Literary Award, the 2017 John E. Weaver Excellent Reads Award for Historical Fiction, the 2016 New Apple Literary Award in the Action/Adventure category and First Place in the 2016 Chanticleer International Book Awards in the Literary Category. It was also a finalist for the United Kingdom’s Diamond Book Award. The first book in the trilogy, "Finding Billy Battles," was published in 2014 and was a Kansas Book Festival Selection and a finalist for a Chanticleer Laramie Award. Book 3 of the trilogy (The Lost Years of Billy Battles) was published June 6, 2018.
Ron has been a presenting author at the Kansas Book Festival and the Los Angeles Times Festival of Books, among other venues. He is also the author of The Kikkoman Chronicles: A Global Company with A Japanese Soul, published by McGraw-Hill. Other books include Aboard the Tokyo Express: A Foreign Correspondent's Journey through Japan, a collection of columns translated into Japanese, as well as three journalism textbooks: The Journalist's Handbook, International Reporting and Foreign Correspondents, and Business and Financial Reporting in a Global Economy.
Before leaving the world of professional journalism where he toiled 25 years, Ron lived and worked in Japan, Southeast Asia, and both Central and South America where he covered several history-making events including the fall of South Vietnam and Cambodia; the Tiananmen Square massacre in Beijing; and wars and revolutions in Afghanistan, the Philippines, Nicaragua, El Salvador and Guatemala, among other places.
Ron's work as a war correspondent resulted in several awards, including the Inter-American Press Association's Tom Wallace Award for coverage of Central and South America; the Peter Lisagor Award from the Society of Professional Journalists; three Edward Scott Beck Awards for International Reporting, and three Pulitzer nominations.
He lives in Murrieta, California and is a proud graduate of the William Allen White School of Journalism at the University of Kansas.

What inspires you to write?
I knew I liked writing when I was in the sixth grade. I loved writing stories and I had a teacher (Mrs. Gooch) who encouraged me. My mother also bought me books and took me often to the library–a place that I found magical and magnetic. She often read to me and I could "see" the story unfolding before me. When I could read myself, I began to devour everything I could get my hands on. Reading took me places I could not, as a boy, otherwise go. As I used to tell my journalism students at the University of Illinois, if you want to write well, read well. My training as a journalist has been invaluable. Journalism teaches you to use words economically, to be accurate, and to write fast. The transition from journalism to writing fiction has not been too difficult. Both utilize many of the same literary devices: transition, pacing, character development, etc. Ultimately, the goal is to tell a good story no matter if you are writing fiction or non-fiction.

Tell us about your writing process.
I don't outline my books, and I don't write down plot scenarios. I start writing and see where the story and my characters lead me. It's a lot like life itself. We may have a goal in mind, but the route to it is often strewn with obstacles, surprises, and sometimes tragedy. I usually write 3,000 or 4,000 words a day, and I edit as I go. In other words, I may write a few paragraphs and then rewrite them within a few minutes of creating them.

I don't write what I would call a “First Draft.” When I finish writing a book, it is finished. I may go back and make a few tweaks with the plot here and there, or alter a little dialogue or some action by a character, but there is no second or third draft. I do use professional "beta readers" or "first readers" and I incorporate some of their ideas.

I know some authors who will write a first draft and put it away for weeks or months and then go back and look at it with fresh eyes. That strategy may work for some people. It doesn't work for me. I guess it's my journalistic training: see it, report it, organize it, write it and then move on to the next story.

For Fiction Writers: Do you listen (or talk to) to your characters?
Yes, absolutely. The main character in my trilogy is Billy Battles. As I was writing I often found myself talking to him, asking him questions, discussing a scene. I "listened" to him speak to me and I made sure he used the vernacular of the time–in this case, the late 19th and early 20th centuries.

What advice would you give other writers?
Try to write as much as you can from your own experiences. They are real and uncontrived and if you incorporate those experiences in your fiction, your work will have a truthful ring to it. Beyond that, KEEP AT IT! Don't let anybody (editors, agents, etc.) discourage you. At the same time, be willing to accept constructive criticism from those who have experience as authors, editors, agents, etc. Notice I said CONSTRUCTIVE criticism. Some people criticize just to be criticizing–or to be malicious. You must believe in yourself, your work, your vision, and your story. If you don't, who will?

How did you decide how to publish your books?
I have been published traditionally and non-traditionally. My non-fiction work has been with publishers like McGraw-Hill. But I decided I wanted to publish my fiction work myself. I wanted total control over my story and characters and I didn't want to get into a creative battle with an editor. My next book will be a non-fiction biography of the woman known as Tokyo Rose.

What do you think about the future of book publishing?
I think publishing today is where journalism was about 20 years. Changes are coming fast. More and more authors are becoming independent and publishing their work themselves. I don't see that trend ending anytime soon. Traditional publishers have earned a reputation of rejecting amazing books and now authors have myriad outlets for their work.

What genres do you write?: ActionAdventure & Historical Fiction