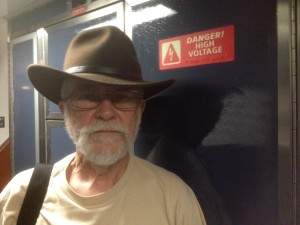 About Ron G. Robertson:
I have always been a bit of a vagabond, having grown up in an Air Force family. I had attended ten different schools in eight different towns and cities by the time I got to high school. The urge to explore continued into my adult life and helped instill a great interest in people, places and situations.
Reading was an early love, and I was fortunate to have enthusiastic teachers and opportunities to take courses in creative writing in high school, which pushed me on to study literature at Baylor University. Those classes were held in the Armstrong Browning Library, which is home to an inspiring collection of works by Robert and Elizabeth Barrett Browning.
My career path moved from pre-med to psychology. I began to gain more insight into the human character, but literature remained my main passion. I have been thinking up stories and writing snippets since my teens, along with reams of poetry.
When I left college, the computer field was booming all over the country and became a perfect fit for me. I continued to scratch that itch to move on, living in seven states during my career. New England had captivated me since my college literature days with Frost, Emerson and Thoreau. The beautiful Great Lakes states of Wisconsin and Michigan added the intellectual excitement of important universities. New Orleans and, ultimately, New York City, fed my soul with writers and artists of all kinds. Travels to the great literary sites of London, Paris, Florence and Wales, the home country of a poet hero of my youth, Dylan Thomas, added to the wealth of influences. I named my firstborn Dylan, after two favorite writers, Dylan Thomas and Bob Dylan.
I had continued my poetry and had begun compiling story ideas, character sketches and short stories. In my late thirties, I started my first novel. After that training period, I began my second novel while I was working in New York City, climbing the same stairs in the downtown office tower that my protagonist, Sam, would walk.
A course in screenwriting at the iconic 92nd Street Y in Manhattan helped hone my skills, and input from well-read friends and colleagues aided in building characters and scenes. I reworked and improved the resulting novel for a few years before publishing “Hijacked Hitman.”

What inspires you to write?
Life. You can’t make this stuff up. But with a good imagination and some hard work, you can make up some good stories.
Like most children, I enjoyed inventing characters and hearing tales by others. I loved reading good stories and for years I was content to work on character sketches and write poetry until finally my own characters and ideas bubbled over into my first novel.
I soon realized I should chalk that novel up to experience and start fresh on a new one. That is when “Hijacked Hitman” popped to mind as I walked the stairs of the office tower where I worked in Manhattan.
I hope my stories can be as good as some of the ones I’ve loved – and better than some others.

Tell us about your writing process.
I try hard to write down the stories that come into my head or into my dreams. Characters are usually already “there,” but I do fill them out with character sketches as I go. Though I don’t outline, I do put down different portions of a story and then stitch them together.

For Fiction Writers: Do you listen (or talk to) to your characters?
My characters struggle to tell their stories and I try hard to listen. My task is to make them as real and as interesting as possible.

What advice would you give other writers?
Write, write and rewrite. It is all practice until you publish. And like any endeavor, practice makes perfect.
Also, read the works of great writers of all genres. Learn from the masters.

How did you decide how to publish your books?
After I finished “Hijacked Hitman,” I worked with a few agents via the Agents and Editors Conferences sponsored by the Writers League of Texas. The conferences also introduced me to independent publishers, including my eventual publisher, Enchanted Indie Press.

What do you think about the future of book publishing?
This is difficult to judge. Writers who have gone with the traditional industry report that they must do their own promotion rather than relying on the publishers. I realized that indie publishing is now a serious alternative, especially when book promotion is included, as it is with my publisher.

What genres do you write?: I write mystery/thriller and science fiction, although “speculative fiction” may be a better label, since science fiction has become so confused with fantasy and horror. I may also try my hand with romance, as suggested by a couple of friends.