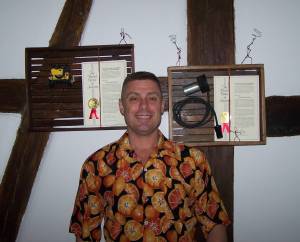 About Robert P. Wills:
Robert P. Wills is a senior U.S. Army Chief Warrant Officer Four, Interrogator. That doesn’t make him a bad person. He’s been doing this sort of work for over 24 years and has decided that writing fantasy stories about unstable Gnomes was a logical career progression from writing intelligence reports. So he will concentrate on that when he retires in late 2014. Really late 2014. About as late in 2014 as one can be and still say “it was 2014 when I retired.”

He is currently stationed in southern Germany, Herrenberg to be exact, where he and his wife are enjoying being empty-nesters and living in a massive four-story house build in 1750. It is much too large for them and they like it that way.

He also has a marginally successful wand business on Etsy under the name SecondHandSorcery where customers are routinely insulted by Grimbledung. The odd part is that they seem to like it.

Robert sells his inventions under the name SixToesInnovations- a US Veteran owned company. Buy American, people!

Unless you’re British, then “No hard feelings? Buy from a Colonial, please and thank you!”

What inspires you to write?
Writing is something I have always done. Throughout my life, I have written many science fiction, fantasy, and horror stories. When I joined the Army, I ended up writing intelligence reports. All have included comedy- I seem to have a hard time to write without tossing in a little humor. Well, not the intel reports. Even my current stories about a vampire (Hugh) takes dips into lighter moments as Hugh, as does my pirate story (The Sailings of Pirate Nonn) even though they are pretty gritty stories.
I enjoy writing. I find it relaxing. Much to the consternation of my friend who also writes, I don’t make outlines, story boards, or any other sort of pre-planning. I sit down and let it go. Two thousand words later, I’ll go back and read what I wrote. Then delete fifteen hundred words. No, hah, hah- see there’s that humor again. I’ll probably keep about 90% of it. Something else I do is I will, for the most part, write chronologically. The ending might be something I have in mind, and an occasional scene might pop up here and there, but for the most part I start with ‘day one’ of the story and go forward from there. That’s how I see it in my mind, so that’s how it gets written.

Tell us about your writing process.
I used to rely on The Great Writer’s Lie: “I will remember it later!” or I would try to jot a note down as I drove. Living in Herrenberg, a little town outside of Stuttgart seemed like a good idea until the county decided to expand the road. The eight-month project (according to the signs) became a year and a half project. My commute went from 40 minutes to an hour and a half. Each way. I had a lot – A LOT- of time on my own crawling along in traffic. I tried to write on a notebook perched on the steering wheel of my mighty 1997 Ford Ka (look it up) but since it was a stick shift, it wasn’t the safest means to write.

Then I bought a digital recorder.

I started dictating the story as I sat and crawled along the A-81. Since my Ka didn’t have air conditioning, I did it with the windows down. Since Germans seem to have an aversion to AC (even in brand new vehicles) they would turn and look at me as I was dictating my stories. Mainly because I did the voices. All of them. When Grimbledung screeched in the book, I was screeching in my Ka. Howls? Those too.

I’m surprised the police never arrested the ‘insane American shouting to himself in his car every morning and afternoon’.

For Fiction Writers: Do you listen (or talk to) to your characters?
Absolutely. Grimbledung and Rat are my two favorite characters. I really enjoy writing what they say to each other. I am looking at uploading my raw digital recordings of them arguing. Those will be on YouTube here soon. When I listen to them, they make ma laugh.

What advice would you give other writers?
Write all the time. When you can’t write, get a digital recorder and dictate your story. I record all week, then on the weekend, I transcribe it and end up with a good 2,000 words plus plenty of leads to go from there.
One word of warning- make sure you dictate an ENTIRE scene. There are many times that my recording is “Grimbledung in the store trying to buy shoes!” And I’m laughing because it’s a hysterical scene. Well, days later when I transcribe it, I have no idea what Grim was doing in the store that was so funny.

To this day, I still don’t know what he did in that shoe store, but it was hilarious. Absolutely hilarious.

How did you decide how to publish your books?
It’s all my daughter’s fault.

It all started when she was having her 15th birthday. She wanted a Harry Potter themed birthday, so we ordered some stuff from Oriental Trading Company, I made a sorting hat from an old leather jacket, and everything was set. While in the garage, I decided to whip up wands as party favors.

I made twelve wood wands, some with leather wrapping, some with a glass marble (the industrial ones you find in spray paint cans) in the hilt, others bent and twisted. The were the hit of the party. My friend told me to sell them online because they were very nice and not injection-molded like most of the wands online were (Ollivanders, I’m talking to you) made of “resin” which is a nice way of saying “injection molded plastic”. In any case, I set up my wand shop on Etsy and after looking at other online venues, thought I should have a little character in the wand-buying process.

SO- I created Grimbledung and Drimblerod. Two gnomes who ran the wand shop. They liked customers, they just didn’t LIKE customers. So they were cantankerous and sent emails complaining about you buying from them. Each wand also came with a back story; 400 words about that particular wand. My daughter (remember, this is about my daughter?) said I should compile the shorts into a book like All Creatures Great and Small. I tried that but it didn’t work, so I thought I’d write about how the two gnomes met and established their wand shop.

In any case, after reading my book (on my little net book) I figured I should see what other people thought. eBooks were becoming popular so I put it on Amazon. I wasn’t planning on writing a series, but book 1 did pretty well, so now I’m writing the ongoing adventures of Grimbledung and Drimblerod.

What do you think about the future of book publishing?
Book publishing will continue with both hard cover and eBook. Even Captain Kirk had hardcover books.

What do you use?: Professional Cover Designer, Dictated and got transcribed

What genres do you write?: Fantasy fiction comedy, horror, adventure

What formats are your books in?: Both eBook and Print, eBook