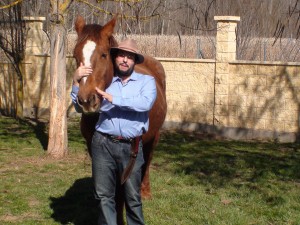 About Richard Falken:
I am an aspiring mechanical engineer who, in his spare time, listens to heavy metal, spreads the word about free software and writes epic literature. I am also a proud knife collector and the official friend of the horses in the small town where I live. I am is a political activist and a known defender of civil rights against the ever-present threat of its enemies.

I was heavily influenced by the epic fantasy genre from a young age. I was particularly attracted to the work of authors such as Margaret Weis, Tracy Hickman and Louise Cooper. I wrote his first novel at the age of 18, and La Espada Vengadora, which has been translated into English, gathered a loyal fan base. I have also published another book in Spanish, El Libro Negro, which is currently being translated to English.

Preferring the quiet life of the country to the busy rush of the city, I live in a small Spanish town with eight dogs, two horses, and an ever growing collection of knives and books.

What inspires you to write?
Most of my inspiration comes from music. Epic Metal, for example, is a genre in which the music involves lots of concepts that serve as great seeds for stories. Some bands publish thematic albums that contain surprisingly inspiring stories.

Tell us about your writing process.
The most important part, and the one I no control on, is having an idea. The idea can come from nearly anywhere, but in my case, it usually comes from a certain piece of music. This idea is not a story, but usually a simple concept, such as “revengeful warrior who has sold his soul”.

One day I realize that many of the ideas I have had, along with the scenes I have daydreamt about, can be put together and form a true story! Then is what the actual writting process begins. I then take it easy and carefully plan the novel: I write a sheet with information about the characters, the setting and the roadmap of the story. I think it is very important to plan ahead of time. There is always certain room for improvisaion, but when you are writting up complex storylines, you need to refer back to the documentation in order to ensure you are not breaking the consistency of the book with your changes.

Once I have finished the novel, I recruit a team of proofreaders to polish the mistakes out and take out plot-holes. This is a very tiresome process, and it takes longer than people thinks, but it is a very necessary thing to do in order to ensure the final product is rock solid.

For Fiction Writers: Do you listen (or talk to) to your characters?
Of course, I don’t talk directly to my characters.

I keep a character sheet in which there is a little bio and some information regarding the characters involved in my plots. It is very important to be in the head of the characters, in order to keep in mind their motivations and why they are doing what they are doing. Each character must have something that makes him or her unique and interesting. This way, they won’t be just a dry plot device, but a dynamizing component of the fantasy world.

What advice would you give other writers?
The best advice is to have realistic expectations.

Many people thinks that all it takes is to write a good book. That is false. Other think that once you have been published, you are bound to achieve success. That is false. The fact is that there are lots of books around competing for the attention of the readers, and expecting yours to become a well known one in a day is foolish. Some people gets really involved and spend big amounts of time and money trying to achieve success with books that cannot achieve it in the markets they are trying to push them into.

The best advice is probably to take it easy, do what you like to do, and have realistic expectations of what you can do with your resources.

How did you decide how to publish your books?
I self-published my first books because Spanish fantasy publishers were going bankrupt or didn’t deal with national authors, preferring to buy licenses for distributing foreign fantasy.

One day, I decided that it was time to make a leap of faith and make my first book available to English-speaking people. I took a group of friends from IRC networks and started to translate the book with their help. Professional translation was out of the question due to monetary concerns, so I solved the problem by getting lots and lots of people checking my own translation and giving suggestions.

Route 11 Publications contacted me while I was carrying the process out. They liked what I was doing so we reached the deal and they got involved in the edition of the book.

What do you think about the future of book publishing?
With lots of authors out there, the web flooded by books, and a lack of any reasonable way to prevent Intellectual Property infringiment, I think the tendency is for traditional publishers to dissappear and be replaced by a different business model.

I think that we will see something similar to what is happening to the movie industry. DVDs and Blu-Rays are being stuill sold, but they are being phased out by subscription services in which the customer pays a flat fee and can access any film he wants. Which is a bit sad, because I like to have disk copies.

What genres do you write?: Fantasy all the way! The real world is too boring.