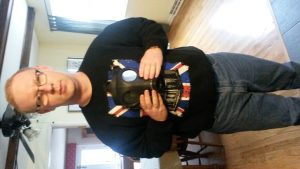 About Rami Ungar:
From a young age, Rami Ungar has known that he’s wanted to write, and from his teens he’s known that he’s wanted to write scary stories. A graduate of The Ohio State University, Rami writes and blogs nearly every day. He’s published two novels, the sci-fi epic Reborn City and the terrifying thriller Snake, as well as a collection of short stories, The Quiet Game: Five Tales To Chill Your Bones. In addition, he’s written and published many short stories, and is constantly working on something new.

In addition to blogging and writing and publishing horror fiction, Rami is also a writer and administrator for the blog Self-Published Authors Helping Other Authors, where he gives advice to authors on writing and publishing. His bucket list includes collecting lots of weird and nerdy stuff, meeting his idols Stephen King and Anne Rice, and going ghost-hunting with the Ghost Adventures Crew.

What inspires you to write?
I think I always had the bug to write, ever since I was little. Or at least, to tell stories. I would spend hours drawing pictures, thinking they would be the storyboards for the next Pokemon movie, or that they would be a fantasy adventure novel. When I was six though, a couple of adults who worked at the synagogue I went to at the time played a prank on me, scaring me half to death. From then on, I tended to gravitate towards stories with monsters in them.
When I was ten years old, I decided to become a novelist, and when I was twelve or thirteen, I was introduced to Anne Rice and Stephen King. Add in the childhood trauma from that prank, and I realized that I wanted to write horror. Except for some dabbling in science fiction and thrillers, I’ve been writing horror ever since.

Tell us about your writing process.
Usually, I start by writing down a short summary of an idea on a list so that if I forget it, it’s still written down somewhere. If and when I get around to writing that story, I’ll do as much research as possible before doing some outlining. I’ll do more research, edit the outline, research and edit some more. Finally, I’ll start writing. On an average of six to eight months later, the first draft is finished. After that, I do several more drafts, taking long breaks in-between drafts so that I come back with a clear head and I’m ready to dive right back in. Finally, when I’ve done all the edits I can and I can’t improve it anymore, I publish the book. And that’s about it.

For Fiction Writers: Do you listen (or talk to) to your characters?
I don’t have conversations with them, but I do feel like my characters communicate with me when I’m working with them. I get a sense of how they would react or how they want to react to situations, and I try to incorporate that into the story. So far, listening to my characters hasn’t done me wrong yet.

What advice would you give other writers?
Write the sort of stories you would want to read. You’ll hear people say “You should write what you know”, or “You should write this or that because it’s what popular.” I find that the people who write for those reasons usually don’t have passion for the stories they write, and it shows. So screw what those people tell you, and write what you want. You’ll be happier for it.
That, and don’t be afraid to try new things. New experiences are the stimuli that allow authors to come up with new and exciting stories. Without them, we run out of ideas rather quickly.

How did you decide how to publish your books?
I originally tried to go the traditional route, but I found that a lot of doors just wouldn’t open for me. A lot of friends I had met online were finding success in self-publishing, so I decided to try it. I have to say, I’ve found my own measure of success. I’m not the next E.L. James or Andy Weir, but I’m doing okay for someone still very young and still building an audience. And I think I’ll continue to get better from here.

What do you think about the future of book publishing?
I think that, as more people realize they can build an audience and have more control over their stories, they’ll pull away from publishing companies and turn to self-publish. Of course, that means it’ll be difficult for new writers to make a name for themselves. Heck, it’ll be difficult for the more established ones. But I think that means that if you’re able to make a living off of writing, you should be all the more grateful for the audience you’ve built with your stories. I know I will be.

What genres do you write?: Horror, science fiction, thriller