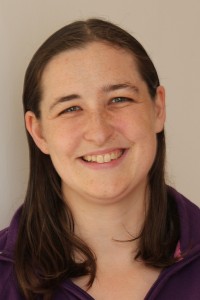 About Rachel Cotterill:
Rachel Cotterill grew up hiding from the real world in a succession of imaginary lands, and has no particular wish to return to Earth. She likes fast-paced plots, greyscale morality, and characters who remain believable when they find themselves in situations that are anything but. She’s always searching for her next favourite author, and is half of the feminist SFF book blog Strange Charm, which exists to showcase the best in speculative fiction by female authors.

When she isn’t reading, Rachel is professionally and perpetually indecisive, splitting her time somewhat haphazardly between writing, computer science, linguistics, recipe development, and travel. Rachel’s third novel, Watersmeet, is a romantic and optimistic fantasy published in 2015.

What inspires you to write?
I don’t remember a time when I wasn’t making up stories; I think I was only about five years old when I got in trouble for telling a friend about the fairies who lived at the bottom of my garden, because she believed me. Nature is still one of my biggest sources of inspiration, from sweeping moors to dark woodlands to hidden corners in a manicured garden. If the words ever get stuck, a hike through the countryside usually gets my brain whirring again. As a fantasy author, I’m always imagining what mysteries might be lurking around the next corner or through a portal between two trees. The urban landscape is just as fascinating: a quiet alleyway or a half-open door always catches my eye. As long as I’ve got my eyes open, inspiration is everywhere.

Tell us about your writing process.
I’m a very disorganised writer, if you look at it from the outside, but there’s still a basic pattern that I seem to follow with every new book.

I write down scenes whenever they come to me, wherever they fit in the story. Even if a scene belongs in a different part of the series (or worse, if I don’t even know where it fits), I write it down when it materialises for fear I won’t be able to summon it back later when I need it. My manuscript becomes a patchwork of emotion, arguments and kisses and punches. Most of this material won’t survive the editing process unscathed, but it’s the raw cloth of which my stories are made.

When I have enough scenes to feel the shape of a book, I take a step back and consider the structure. This is the time of post-it notes and mind maps and timelines, when my study explodes in a riot of coloured paper and thick pen-strokes. Scenes get rearranged, and the paths between them mapped out. I started as a playwright, so I find the traditional three act structure really helpful for thinking about how the plot progresses.

Then comes the hard part, for me, which is to write into the gaps, weaving together the fragmented pieces into a coherent whole. At this point I have to hold the whole story in my head, while focusing in on each scene in turn. I still leave small gaps where I’m not sure of something; a lot of details can only be filled in during the final edits, when all the timelines have crystalised (what flowers are blooming this week? is the moon full or crescent?). I have a whole notation system for recording facts I have to check or skeletons that have to be fleshed out.

Then it’s time for editing… except it isn’t, not quite yet. I like to let a project sit untouched for at least a few months before diving into the editing process. That space gives me chance to distance myself, and get a bit of perspective that I wouldn’t have if I dove straight into edits. Besides, I probably have ten other things I want to be working on in the meantime, that I’ve been pushing to the back of my mind.

For Fiction Writers: Do you listen (or talk to) to your characters?
I have two primary modes of engaging with my characters as I’m writing.

One is to watch a scene unfold in the cinema of my mind, as if watching a recording. I might do this several times, trying out different actions and reactions, different lines of dialogue, and following through the consequences of different character choices. Even different imaginary camera angles can give me a fresh perspective on a scene.

The other way is more interactive, and yes, I talk to my characters — but not as myself. I’ll insert myself into a scene and play it through as one character, trying to feel their emotions and understand their reactions. Then I’ll replay the same scene from a different point of view. I find this particularly important for characters who don’t ever get to be point of view characters in the narrative, so that secondary characters still have fully fleshed-out internal worlds and motivations.

What advice would you give other writers?
There isn’t much writing advice that will work for everyone, I don’t think — individual writers are so different, we all find different things that work for us. But something that’s probably quite universal is a tendency for perfectionism to get in the way of finishing. It’s fear, basically. Fear that this work you’re pouring your heart and soul into won’t be worth it, won’t be ‘good’ (whatever that means), won’t be valued. Sometimes you have to force yourself back into the chair and just do it. Stop getting in your own way, if you possibly can. Meditation helps, for me, as does keeping a regular schedule of exercise, and getting enough sleep, and taking time for personal reflection. So my main advice for writers isn’t writing advice, it’s life advice, it’s about building a solid foundation for everything you do. You’ll struggle to get through the difficult parts of the writing process if you don’t have other things fairly well under control.

How did you decide how to publish your books?
When I finished my first novel, I did consider sending out my manuscript to agents and publishers, but only for about a day. By the time I’d done some basic research and understood the timelines involved in traditional publishing, I was feeling exhausted just thinking about it. At the time, most submission guidelines warned against simultaneous submissions, which translated into the prospect of sending out a query, waiting for a response, and doing nothing in the meantime. And even once a book gets a publishing deal, it will take months — it can even be a couple of years — to see it hit the shelves. Compared to that, there was no contest. I could make my own cover in an afternoon (I’ve subsequently had it redone by a professional artist, don’t worry); I could figure out the formatting on my laptop; I could have a file uploaded and published within a week. It was just so liberating.

What do you think about the future of book publishing?
I love the increasing democratisation of the publishing process, and I sincerely hope it’s going to lead to an ever greater diversity of voices getting heard. I’m a bit worried that the increasing professionalisation of self-publishers is edging out those without the money to hire editors and cover designers and typesetters. You’ll hear people saying that you shouldn’t publish if you can’t afford to invest in those things, but there are a lot of great voices out there which belong to people who just don’t have the ready cash. And the irony is that it’s the most marginalised groups, whose voices haven’t been represented so well by traditional publishing, that are most likely to start from there. Personally I’d rather read something raw with a few typos than never see those works. Seems like you have to have a fairly well established following to even succeed at Kickstarter, for fiction, but I guess the future for young publishers is going to involve platforms like Wattpad to build an audience, followed by crowdfunding for the production costs. I don’t think the self-publishing genie is ever going back in the bottle, though, so I’m really excited about seeing ever more variety hitting the bookshelves.

What genres do you write?: Fantasy, Science Fiction