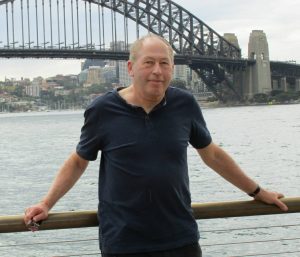 About R J Gould:
I write contemporary romantic fiction, using humor to describe past, present and sought after relationships. My characters, some highly eccentric and some plain ordinary, are trying to make the most of their lives while carrying heaps of baggage. They struggle to balance the pressures of work, friends and families as they search for romance. The male perspective on relationships provides a refreshingly original viewpoint.

I was selected for the New Writers' Scheme of the UK Romantic Novelists’ Association and following this success, was taken on by the publisher Accent Press. 'A Street Café Named Desire' was released in December 2014 and shortlisted for the 2016 Joan Hessayon First Novel Award. 'The Engagement Party' was published in May 2015 and 'Jack and Jill Went Downhill' was released in June 2016.

I'm a member of the Society of Authors and of Cambridge Writers, where I lead a Commercial Editing Group. I was the organisation's short story competition winner in 2011, awarded third place in 2015, and my writing was commended in 2012 and 2014.

I have a new novel, Nothing Man, ready to go.

What inspires you to write?
I love writing about people – delving deep into their thoughts and actions provides a wealth of material. Consider your own character, the complexity, mood swings and mix of rational and irrational behaviour. Next, think of the person closest to you, a partner, a relative, your best friend. Despite the feeling that you're on the same wave length, they are of course so very different to you. With seven billion people out there that’s a lot of material to choose from, with each person providing countless possibilities. Plot is essential, but for me the starting point is character. To date, the novels I've written have started with an idea sparked by an actual event which has set me off on a totally fictitious journey.

Tell us about your writing process.
I know the start and end points of my novels and some mid-story events that I want to include, but I don’t plan in detail ahead of starting to write. I let the characters drive the plot. I have no regular writing routine though I tend to do much of it during evenings having finished a day job. Fortunately I'm a night person, quite possibly at my strongest then and certainly more alert than early morning.

I see editing as part of the writing process rather than the unpleasant thing to do at the end and I enjoy that part of the process. Creative writing courses I've taken have been useful; they didn't inform how to write but did offer a menu of approaches, leaving it to me to decide what best suited.

For Fiction Writers: Do you listen (or talk to) to your characters?
Absolutely. They grow with the plot and sometimes make me change it. The downside might be the need for more editing, but the upside is that the characters become more powerful and realistic.

What advice would you give other writers?
Write for yourself not for any particular market. The more you enjoy what you write, the more it will come through in your fiction. It's a long journey, the writing, finding an agent, a publisher, but DO persevere – and good luck!

How did you decide how to publish your books?
I had great feedback from agents but was told 'it's such a difficult market.' So a group of fellow authors at Cambridge Writers decided to self-publish together, sharing ideas. This was early 2012 and we had some success. I think it's considerably harder to get visibility now. Fortunately a publisher has taken me on (without an agent), though that still leaves me to do the majority of the marketing.

What do you think about the future of book publishing?
That is a hard question. E-publishing has provided an opportunity for so many more authors to get their work out which can only be a good thing. I do worry about returns to the writer, often just a few cents (pence – I'm English!) per book after all that hard work. A second issue is that there is no quality control making it confusing for the reader with such a saturated market.

What genres do you write?: Contemporary Romance