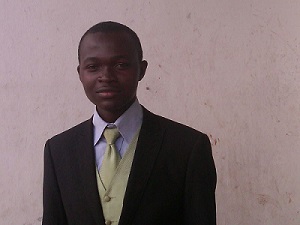 About ‘Nonso John:
Born to Nigerian parents in the Nigerian capital city of Abuja, ‘Nonso John is a Thriller writer, and loves to write – and read – Suspense, Mystery, and Detective Thriller novels with a little bit of Romance.

Having been raised in a Christian home, ‘Nonso was taught that God wrote the Bible. So he figured God also wrote every book in print. And so, after reading his first novel – James Hadley Chases’ “No Orchid For Miss Blandish” – at age six, he found his life’s purpose: to be the very first human to do something that only God had done prior to that time – to write and publish books of his, and beautify the world with satisfying stories.

Aged six, with a borrowed pencil, and a new 20-leaf his dad got him, ‘Nonso launched a career.
As at 2014, aged 23, ‘Nonso John has written eight full-length Thriller novels.

What inspires you to write?
God. Family. Love. Truth. Music.
These are the things that make me want to keep stringing words together, to form sentences, till they make up a full novel.

I’m grateful to God for giving me something as awesome as a talent for writing, an ear for good dialogue, which I have found a way to instill into my characters every single time (unless of course, they are supposed to be different in the stories I feature them) and also a life of purpose.

Every other thing on the list: family, love, truth and music, are just extras from the first priority: God.

I do not use the plot.
Not like I have never plotted, but in my earlier years, I discovered that each time I plotted, I ended up not following it somewhere halfway into the story.
This is because it makes the story – for me at least – too stereotyped and rigid.
For instance, if in my plot I planned character A to die at a particular point in a particular manner, it almost always happens that by the time I get to the point where this character is supposed to die, it becomes unnecessary for him to die, and even inconceivable for him to die in the manner I had originally planned.

Sometimes, letting a villain – maybe a criminal – get caught by the police simply because it was in my plan, makes the villain look too stupid, compared to the intelligent picture of him I had built earlier on in the narrative.

So, I discovered my style.

In spite of what many people think is wrong with it, it just is the style I am comfortable with.
I get to know everything I can about my main characters, I assign them personalities, and even get pictures of movie actors and actresses I think could play the role if it were a movie, to represent my characters. These pictures I place along side the character’s name and profile on the white board hanging on a wall in my bedroom. I assign my characters different temperament combinations, and both good and bad habits – all the main characters.

Then I put them in complicated situations, and the more complicated it gets I think, the better. And then in my mind’s eye, and as fast as I can, I watch these character – who to me, are not really character but real people – work their way out of the mess. Whatever I see them do or say, based on the picture of them I have created and the personality differences, that is what I write.

So in a sense, I just let the people in my head act out the story.
Then I report it the way I see it.

For Fiction Writers: Do you listen (or talk to) to your characters?
While writing, I actually live with my characters.
Of course they are not just characters to me, but real people.
And I try to keep them that way.

As a matter of fact, sometimes, I see people around me who do something that a character I had created would do, if put in the same situation, and sometimes, that just makes me …aahh…just puts these huge smiles on my face.

I talk to my characters. I even rebuke them when I see them do something that is just plain stupid, and unbecoming of the particular character and the personality we had built together.

What advice would you give other writers?
Two things.

One, If writing does not make you happy, do not even dare come to the blank page. There’s a lot of room for self doubt and discouragement. Only a genuine love for the craft will keep you going.

And honey, sit your butt in the chair and write the damn thing. A lot of people call themselves writers, attend every writing academy in the country and register for every writing conference, but never find the time to actually write. Singers sing. Drummers drum. Why do writers not find the time to do their thing?

I don’t understand it.

How did you decide how to publish your books?
When I finished writing my first published novel, Squeeze, and decided I wanted it to be my first published book. I decided it could compare to “No Orchid for Miss Blandish”, which had always been my standard, and so I started sending out queries to agents in the US and the UK. I queried some local publishers in Lagos, Nigeria, but I got a lot of rejection slips.

I kept sending out queries and submissions, but was not getting the result I wanted. Then I discovered Amazon.com and their Kindle Publishing feature – the KDP.

At first, I was cautious, since I had never done any internet selling before. So I tested the waters with Amazon’s KDP for a while, and recorded 799 downloads within three weeks of publishing the book.
The next week, I discovered Smashwords and realized they were even better than the KDP on Amazon.

I was hooked. My books have been on Smashwords since then.

This might look like a bad thing, but I believe it is for the better, as it will serve to filter out the bad writers and the merely competent writers. No reader would read a bad book and give it a good review. Also, no reader would want to read another book by the same author who had disappointed with a previous title.

This calls for the best from the writers, and I love the challenge.

I also believe that the time will come when almost every book published will be as ebooks on the internet.
I strongly believe this.

What genres do you write?: I write a range of Fiction: Crime, Mystery, Thrillers, Fantasy, Speculative, Christian, Romance, Police Procedural, and so on.