You are here: Home / Interviews With Authors / Interview with Author – Montgomery Mahaffey 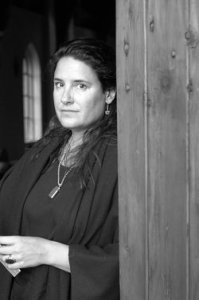 About Montgomery Mahaffey:
Montgomery Mahaffey is a fantasy writer who has told her stories all over the country. Alaskan winters shaped Mahaffey as a writer, and her work is built off of the myriad of personal and collective experiences formed underneath that mystical landscape. Born in the south to a family of storytellers, Mahaffey has developed her own voice that is suffused with the temperament of the wanderer instinct. Set in a world where magic is at once subtle and pervasive, her novels bring to life symbols and stories of the old fairy tales told with wry humor and passion. In 2005 she was granted the Individual Artist Project Award from the Rasmuson Foundation in Anchorage, Alaska. Ella Bandita and the Wanderer is her first novel.

What inspires you to write?
All kinds of things – there’s no one type of stimulus that gets me going. For example, a couple of years ago a painting of an absolutely gorgeous, voluptuous horse at a street fair stopped me in my tracks. I bought the painting immediately, and came up with the bare bones of an ill-fated lesbian love story by the time I came back at the end of the night to pick it up. That’s how random it is – and that story is a hit every time I tell it.

Tell us about your writing process.
I wouldn’t say that I’m an outliner, but I am working from an outline of briefly sketched chapters for my next novel – so I’m not averse to the concept. Typically though, my stories start as fables that I can tell easily from 20 minutes to a couple of hours – which I then later expand into a novel. That’s how I wrote Ella Bandita and the Wanderer. I tend to write a really godawful draft or two and then flesh out the characters as I’m writing – because they reveal themselves as the story unfolds.

For Fiction Writers: Do you listen (or talk to) to your characters?
Absolutely. It’s how the Ella Bandita stories became a 4 book series – because a character who was originally intended to be a one-night stand took off and became a villain so vile, it was painful to write him. But I couldn’t ignore or turn my back on the process of creation. I had to let it flow. By the way, the rough draft of that novel was a seat of the pants writing project – no outline.

What advice would you give other writers?
Read and lot and write a lot. It’s the authors you love to the point of intimidation that will influence your style the most. Also, have fun with it, and keep your sense of humor – especially on the bad days. Writing is hard work – be kind to yourself.

How did you decide how to publish your books?
To be honest, I wasn’t getting anywhere with the publishing industry and I was pretty disheartened, and a little disgusted with the game of it all. At conferences – and I went to many – I definitely felt like the geek trying to get approval from the popular crowd in my dealings with the agents and editors. That experience really turned me off – and since it’s set up that I can get my work out there without the monolithic publishing industry – I decided I’d rather go that route anyway. Also, my DIY small press is a homage to my brother who died about 2 1/2 years ago – so, I’m committed to this path.

What do you think about the future of book publishing?
I think publishing industry will continue as it has become. But I do think that the more original and innovative voices and stories will be found more and more often from independent authors. I would really love to succeed on an epic scale this way, and to see that happen with more of us – so much that there would be no need to sign with a big publisher to be well known. But I’m finding joy in pursuing my writing path on my terms, even though it’s difficult. At least my work is out there for those who end up finding it.