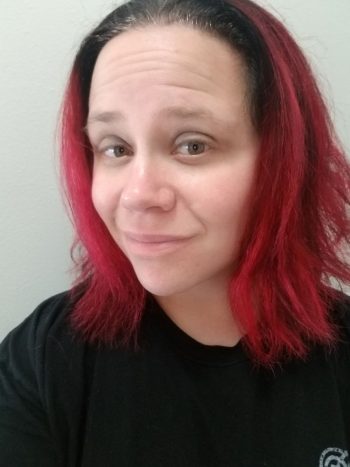 About MJ Vieira:
MJ Vieira resides in Central Iowa with her husband, Alan, son, AJ, their dog, Poopah, and cat, Sir Fluffabut. MJ is very proud of her home state of Maine and as a child, she traveled around the state with her parents. This allowed her to see the vast history the New England state had to offer. As a teenager, she toured the nation while showing her American Quarter Horse, Truly Vested. While traveling, she read many of the great authors of the time including JRR Tolkien, Stephen King, CS Lewis and Ann Rice. It is these writers combined with the power of music, mainly hard rock and folk, MJ draws her inspiration.

What inspires you to write?
I started writing as a teen for a way to cope with some stressful issues going on around me. I'd always had an active imagination so setting pen to paper was a natural and therapeutic course for me to take. Between riding horses and writing, I was soon able to let go some of that bottled up teenage angst. It wasn't until I was an adult that I began to write with the thought of publishing. But once again, I began writing to work through issues going on in my life. However, with the encouragement of some good friends and new options for people to self publish, I shared my work with others.

What authors do you read when you aren’t writing?
I have so many! J.R.R Toilken, Karen Marie Moning, Mike Carey, Anne Rice, Karin Slaughter, Meredith Ann Pierce, and J.K. Rowling.

Tell us about your writing process.
I get asked a lot if I'm a planner or a pantser. The truth is, I'm a bit of both. I usually have an idea of what I want to happen in the story but nine times out of ten, the outline I make gets edited daily while I work on a project. I use music to help me write; almost every character of mine has his/her own playlist. The music allows me to tap into the character and write the scene. I also create idea boards with Pintrest for costume, world and creature idea.

For Fiction Writers: Do you listen (or talk to) to your characters?
My characters tend to be a chatty bunch. Thankfully, they don't all talk at once; I wouldn't be able to think at all if that were the case. So, I do talk to the and they talk to me. I find that the more I try to push my characters in a certain direction, the more they fight and the less writing I get done. I've learned to start listening when they tell me something because chances are, the story will work out better if I trust them.

What advice would you give other writers?
Don't give up and don't get stuck on making everyone happy. There will be a lot of people trying to make you give up and you certainly can't make every reader happy. Write the story as you see fit.

How did you decide how to publish your books?
I had a few friends who self published when I started writing; I used their advice to proceed. I would someday like to be traditionally published and I'd advised other authors to explore all avenues before they make a decision.

What do you think about the future of book publishing?
I think self publishing will eventually be more prevalent than traditional and that soon, the bigger publishers will start courting the indie world to find their next big sellers. Right now, we have to beg them to even have them look at our work but people are tired of that. Eventually, the tides will turn.

What genres do you write?: Paranormal thriller, horror and fantasy