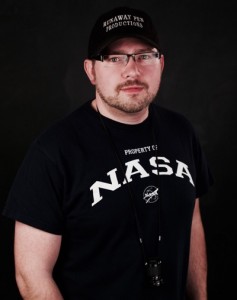 About Mikel J. Wisler:
Mikel J. Wisler is an award-winning filmmaker who has written, produced, and directed several short films that have played at festivals domestically and abroad, receiving nomination and awards. In 2012 he became a co-founder of Stories by the River and since 2010 has run the monthly River Film Forum.

Wisler had written several screenplays as well as short stories and novels. His novel, Unidentified, is the first book he’s published, with more books currently in the works. He is a lover of the sci-fi and horror genres and many of his films and stories reflect this.

Wisler also writes articles for Horatio (hellohoratio.com) and conducts the monthly River Film Forum events centered around the exploration of life’s meaning through cinema. Born in Brazil, South America, where he spent most of his childhood, Wisler now lives on the south shore of Boston, Massachusetts, with his wife, daughter, and dog.

What inspires you to write?
I love storytelling because I believe it is uniquely equipped to help us understand life, ask difficult questions, and wrestle with the really scary, messy, and hard to deal with stuff that life throws at us. I have a background in philosophy, and I think stories are the way in which most people actually do the hard work of examining life that Socrates talked about when he said, “The unexamined life is not worth living.”

As a result, I have been inspired by a wide range of writers and stories because I’m alway is search of that next story that’s going to touch on something transcendent and make me walk away and have to ponder it and life for a while. I do have a particular love for science fiction and horror stories. I love being able to really dive into areas of life in stories that don’t always come up in casual daily life but that do pose very real ethical and practical issues when push comes to shove. We put ourselves in the shoes of the characters and ask ourselves how we would respond. I think this is such an important aspect of storytelling, both as one experiencing a story and as one writing a story. I learn so much about life and myself when I write.

Tell us about your writing process.
I definitely am an outliner. I think I’m pretty heavily influenced by how much screenwriting I have done. I find it incredibly helpful to start with a big picture idea of what the story is and then slowly breaking it down into a general sense of how the story will flow, then down further to the major beats, and finally a scene-by-scene outline. Then I’m ready to write a first draft.

For my novel, Unidentified, I actually wrote the feature length screenplay first. Then I wrote the first draft of the novel. So I had what was essentially an already incredibly detailed outline or blueprint (which is what a screenplay really is) to work from. But I also had a lot more freedom to dive into the inner lives of the characters when writing the novel that is not the case when writing a script. I’m doing the same thing now with the novel I’m currently writing, which is a time travel thriller called Stop.

For Fiction Writers: Do you listen (or talk to) to your characters?
I’m not sure I ever have had full conversations with characters I’m writing, but I do find that I like to spend time thinking about how they see the world and how they might respond to various situations, even if only internally. This is probably the most important thing to me: what’s going on inside their heads and hearts. I also do find it important to hear lines out loud as I’m writing, so I can consider how a given character would choose words and what would be emphasized.

What advice would you give other writers?
I think one important lesson I’ve learned and shared with some people is to not be too in love with the early stuff you write as you start out as a writer. Initially, we all need to flounder a bit and find our voice and our specific approach. So those early projects tend to be personally meaningful, but also a bit derivative of the writers we admire. In the world of screenwriting, the advice is to write that first script, then put it in a drawer and get busy writing the second and third and so forth. Most screenwriters don’t hit their stride or reach their writing maturity until their fifth or six script. Being too in love with that first script can make it tempting to keep polishing it over and over and over when really you should be moving on to new material. I think the same applies in many ways (but maybe not all ways) to writing short stories and novels.

How did you decide how to publish your books?
With Unidentified, I realized there was an opportunity to begin connecting with the film’s audience ahead of time by getting the story out there as a novel first. As an independent filmmaker, I need to be able to show to investors that there are people legitimately interested in this story before we shoot a single frame of the film. Plus, I had so much fun writing the script, I didn’t want the experience to end. So going right from the script writing into the novel writing was great. I also have been watching the world of self-publishing change dramatically over that past ten years, and it just seemed to me like the time was write to take this approach.

What do you think about the future of book publishing?
I think in many ways all of media has become about abundant choices for consumers. I think book publishing much like music distribution is becoming more and more about connecting with specific niche audiences who are incredibly enthusiastic about a specific genre or type of characters and story. Sure, I think there will still be some place for the really big books that get read by a large cross section of the population. But I do think those will be much fewer in the future as new writers become more innovative and connect directly with their target audiences through the internet and get their books into their audience’s hands quickly and inexpensively. This is exciting because it allows authors to take bigger risks in their stories and maybe even publish stories traditional book publishers would turn down.

What genres do you write?: Science Fiction and Horror