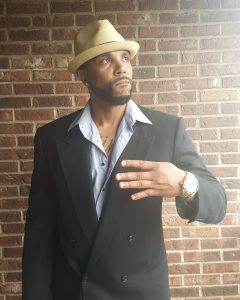 About Mike Peek:
Michael Dion Peek was born in Cincinnati, Ohio. He was previously ranked as the fourth-best freshman basketball player in the nation. After not making it to the NBA and stints of homelessness and drug dealing, Michael turned his life around. Michael currently has an associate’s degree from Schoolcraft College and a bachelor’s degree from the University of Cincinnati and is currently in his second year of pursuing a master’s degree from South Dakota State University.

What inspires you to write?
I was inspired to write after being told several times that I was a great storyteller. I have been telling stories as long as I can remember but I never wrote them down. However, it was after a series a conversations with several young people that I realized I had a message that I wanted to get out. That is why I started writing my memoir.

Tell us about your writing process.
My writing process was about two years. I went from jotting down notes to trying to organize those notes into some kind of story. I would say that during the final months of finishing this book I worked extremely hard on writing and rewriting trying to get a compelling story.

What advice would you give other writers?
The advice that I would give to other writers is to stick with it. I don’t think anyone writes a bestseller the first time they put in the paper. Writing a book really is a process of repetition.

How did you decide how to publish your books?
I decided to publish with Amazon. I had heard very good comments about Amazon treatment that new authors.

What do you think about the future of book publishing?
I think the future a book publishing is still evolving of course it’s technology changes so will the publishing. I can even see authors writing and printing out books from their computers or tablet on demand. What would that mean for publishing companies or for authors in general I can only imagine.

What genres do you write?: Memoirs, nonfiction, sports, inspiration, basketball