You are here: Home / Interviews With Authors / Interview with Author – Michael Meyerhofer 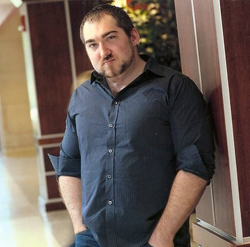 About Michael Meyerhofer:
Michael Meyerhofer grew up in Iowa where he learned to cope with the unbridled excitement of the Midwest by reading books and not getting his hopes up. His debut fantasy novel, Wytchfire (Book I in the Dragonkin Trilogy), won the Whirling Prize from the Kellogg Writers Series and was nominated for a Readers’ Choice Award by Big Al’s Books and Pals. Book II will be out this summer. An eclectic writer, he has also published several books of poetry. His fourth, What To Do If You’re Buried Alive, was just released by Split Lip Press. His third, Damnatio Memoriae (lit. “damned memory”) won the Brick Road Poetry Book Contest. He has also won various other poetry prizes, including the Liam Rector First Book Award, the James Wright Poetry Award, and five chapbook prizes. Probably due to his father’s influence, he developed a fondness for Star Trek, weight lifting, and collecting medieval weapons. He is also addicted to caffeine and the History Channel.

What inspires you to write?
While I tend to read pretty much anything I get my hands on, I probably draw most of my inspiration from daily life. I had a very blue collar childhood (to put it kindly), so as a result, I often find myself drawn to the stories of the everyday people around me. I’m also an unrepentant history and astronomy nerd. I don’t think there’s a documentary on Netflix that I haven’t watched at least once.

Tell us about your writing process.
While I tend to base my characters (or at least some aspect of them) on real people that I’ve known, I love weaving in historical elements from things I’ve read about or watched in documentaries. I’m really fascinated by moral ambiguity, as well as spiritual crises and issues of social justice, so those things tend to find their way into my writing, too. In terms of actual process, though, I often start with a single image or scene, and add in small details–as tangible as possible–to put flesh on the story’s bones. Especially when I’m working on a big project, I’ve learned that writing a detailed outline is somewhere between helpful and essential… as is a willingness to veer off the scheduled path when it feels right for the story. I write best when I’m listening to music, but it has to be something without lyrics–Jazz, classical, trance, New Age, even medieval music if I’m writing a scene where it helps if I feel like I’m sitting on a bench in a mead hall. There’s another, vital element to my routine: caffeine. Exercise helps, too. I’m really into weightlifting and I’ve found that if I work out a couple hours before I write (either early in the morning or late at night), my thoughts are a lot clearer.

For Fiction Writers: Do you listen (or talk to) to your characters?
I think it’s important to know your characters inside out… not just the big things (the scars and tragic back story), but the small details that make it work: the kinds of food they like or hate, small quirks that will make them more real to the reader, etc. I don’t necessarily talk to them, but I do have long periods in which I kind of daydream by putting myself in their positions (good guys and bad guys alike), which is another thing that helps me help the reader get into a given character’s head–for better or worse.

What advice would you give other writers?
Write without ceasing. I don’t mean that literally, of course, but I do think that one of the best things a writer can do is constantly ask themselves how they’d describe whatever’s going on in front of them, whether it’s a ruddy slant of sunset sliding down the face of a mountain, or a taco sliding down a wall after it was thrown by a drunk at an imaginary ex outside the Taco Bell.

How did you decide how to publish your books?
I gave a lot of thought to this. While I know there are plenty of good self-published books, and plenty of bad books that come out of a “professional” publishing house, I also feel like writing is a pretty darn solitary act, and it helps to have someone on your side. So when I publish, I look for presses (big or small… usually small) that publish work I genuinely like to read, and who seem really committed to helping writers put out the best work possible.

What do you think about the future of book publishing?
I don’t think that electronic publishing will ever completely replace an old fashioned book printed on recycled trees, but I do think that electronic publishing will continue to grow–and that’s a good thing. These days, I read printed books and magazines about as often as I read books on Kindle, and honestly, I don’t think one is better than the other. Each has their benefits and I totally believe they can coexist. Additionally, I think that small, independent presses will continue to gain in popularity, which will in turn continue to feed into a growing market for independently published books. Put another way, the big commercial bookstores and publishers aren’t going to go completely out of business–nor should they–but they’re going to have to deal with a lot of electronic competition, not to mention increasingly discriminating readers.

What genres do you write?: Fantasy, Poetry