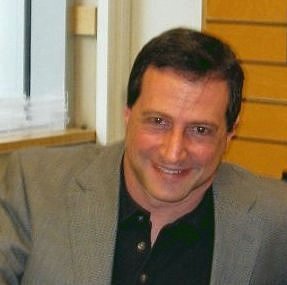 About Michael Califra:
Michael Califra lived and worked in Germany, mostly in Berlin, from 1986 to 1998 where he wrote the novel, “No Man’s Land”. When he first considered writing about the Berlin it was still divided. The challenge then was to render in fiction a situation more absurdly fictional than any he could imagine. Only after the fall of the Berlin Wall and German reunification did it become clear that the tragic division was only part of the story.

What inspires you to write?
When I wrote “No Man’s Land” I had already been living in Berlin for many years and loved the city. After the Wall came down and Germany and Berlin were unified, it soon became very clear that the city I knew would soon be erased by history; just as the Berlin of the Kaiser had been overtaken by Weimar Berlin, which had then been wiped away by Hitler’s Berlin, which was then replaced by Cold War Berlin, (which was of course two Berlin’s). Wanting to document something you know will soon disappear forever can be a powerful motivator.

Tell us about your writing process.
So far, I’ve written only the one novel. Since it is a work of historical fiction, history had pointed to the route I had to follow. So on one hand that was easy. On the other hand, trying to provide surprises or a new perspective to the reader, even though everyone knows where the story is going in the end, can be a challenge. So in effect, when you write inside real events, those events themselves become the whiteboard.

For Fiction Writers: Do you listen (or talk to) to your characters?
Try picturing people you know well. Put them inside characters and put those characters in certain situations and think about how they would react. When you do that, they will speak to you.

What advice would you give other writers?
Write about something that really grabs you. If you do that you’ll eventually have something in the end, no matter how many roadblocks turn up in the process.

How did you decide how to publish your books?
I tried going the usual “query to agent” route with “No Man’s Land” while I was still living in Germany. I couldn’t get any traction. The thought of going through that whole process again really turned me off. I just decided to do it as an ebook and go directly to readers. It’s incredibly liberating.

What do you think about the future of book publishing?
It’s changing so fast I don’t know that anyone can predict where it’s going with any accuracy.