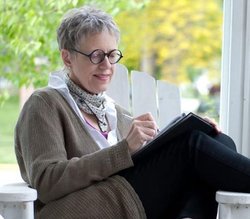 About Meg Wolfe:
Meg is a long-time nonfiction writer, most recently of The Minimalist Woman blog and its related self-help and cookbooks. She now focuses almost exclusively on fiction, and has written and published two mysteries, An Uncollected Death and An Unexamined Wife. A third, An Undisclosed Location, is slated for release in Summer of 2015.

Meg has an MA in English. She lives in Northwest Indiana with her husband, writer and photographer Steve Johnson.

What inspires you to write?
Inspiration rarely plays a role in my work; it did when I was younger, but I found it to be both unreliable and unsustainable. Instead, I get out of my own way and accept that I’m simply a maker of things by temperament, whether it is a story, an essay, a world– or even a garden. As a consequence I actually look forward to writing every single day. It sustains me, and gives me purpose.

Tell us about your writing process.
I’m an outliner that revises outlines by the seat of my pants, and I start by penning notes on a steno pad. The outline starts as a three-act structure with plot points in the appropriate places. Then I think about how that story could happen in my fictional world with my fictional characters. How does the protagonist become involved, how is she connected to those plot points? This is when I sit down at the computer, using Scrivener, and write three story synopses: the story of the problem, the subplot story of the protagonist, and the story of solving the problem. Then I break those down into a timeline–what has to happen or be revealed when. This creates a more detailed outline, gives me some idea of what’s going to happen in each chapter.
On occasion, I will write a scene out of sequence, or part of a scene that veers off from what I want the chapter to do. I save those chunks of writing in another section, and often pull them out to re-use in a different part of the novel–or even in a later novel.
Sometimes– okay, often– as I write each scene and chapter, I realize that I need to go back and make certain some detail is revealed earlier, or somehow changed. Or maybe I realize that a different character would be more plausible for certain key scenes, and work that in. This write and revise process happens all the way to the end of Act II. After that, I tend to blaze through Act III, and rarely need to give the outline a glance.
My characters evolve with each book, as I learn– and reveal– more and more about their history and motivations. That evolving, however, often means going back and making changes in various scenes, and sometimes even in the ending.
The advantage of this going-back-over method is by the time I get the manuscript to my Beta readers, it’s more like a second draft than a first, which saves a lot of time and pain for all involved. I take their critiques and edits under consideration, and make changes where appropriate– even it if means throwing out thousands of words and dozens of scenes. Finally, the opening chapter gets rewritten and rewritten some more, followed by several proofreads of the entire manuscript, both on the computer and in a printout.

For Fiction Writers: Do you listen (or talk to) to your characters?
I don’t talk to my characters, but I do watch and listen. I see each scene happening in my mind’s eye as if it’s a movie, and then I try to feel what is happening from my protagonist’s perspective, since I write in third person close. Or I’ll try to feel it from the perspective of whoever is telling a story, whether in person or in something my protagonist is reading. Sometimes when a scene feels flat, I try to see it from the point of view of the antagonist or a supporting character, because it gives me a better idea of how they would or wouldn’t act– things that my protagonist will then observe and respond to.

What advice would you give other writers?
Write millions of words, whether in journals, stories, letters or blog posts, since that will reveal your own unique voice.
Learn the craft of the format you choose– and, hopefully, choose a format you actually enjoy reading. I love reading mysteries, so I decided to write them, despite the fact that I’m not a natural plotter, and my style is more suited to women’s fiction. But I read tons of guides about structuring traditional mysteries, took what I could from them, and worked out my own process. As a bonus, focusing on craft creates a healthy separation between you and your work– criticism feels less personal, and revision is easier. I liken it to being a sculptor; the first-draft book is a rough-cut chunk of marble or walnut that needs shaping and refining. The book is not you, it’s something you craft.
Train your brain. Few of us can sit down and write a novel in a one-week marathon right off the bat, or churn out four novels per year. I still can’t. But it is possible to form good mental habits, to find ways to focus when it’s your writing time, and to do it on a regular basis, even day-in, day-out. It might take some stubbornness, some shutting out of other demands on your time and attention, and maybe even a dose of self-delusion. It definitely takes whatever brain power you possess, but that can be built up like any other muscle.
Beware the research rabbit-hole. Sometimes the Internet is just too much fun. I start to look up something and then it leads to something else, and the next thing I know I’ve lost half a writing day to acquiring more background information than I can possibly use. It’s not always a bad thing, but at some point you have to decide to write and not avoid writing by doing more research.

How did you decide how to publish your books?
My first books were nonfiction, connected to my blogs, so self-publishing was a natural choice. For my first novel, I originally thought I could test the waters with self-publishing and then if it did well enough, perhaps an agent or traditional publisher would be interested, something that happened more than occasionally at the time. But the publishing world was changing so much so quickly, that was soon no longer true.
I decided to stick with self-publishing because I didn’t want to risk the time– years, even– that it might take to secure an agent, and then a traditional publisher. Furthermore, there were no guarantees it would happen at all, and not always due to the merit of the work. My goal was to have the first three books of my series written and published by the summer I turned sixty. Three books proves there is a series in progress; this makes marketing and growing a readership a lot easier while continuing to write.
My advice to new authors considering self-publishing is to do your research–not only on how to write and publish a book, but on the current self-publishing trends. What worked six months ago might not work this month. Amazon is the 800-pound gorilla today, but what if that changes? Keeping tabs on the industry and the market is imperative, as is remaining light on one’s feet. A self-published author has a lot of control over where a book is sold, at what price, how it looks, and targeting the intended audience. When trends change, you can change with them. And if you decide to seek a traditional publisher, the knowledge and experience will help you understand what’s at stake.

What do you think about the future of book publishing?
For the most part, readers don’t care how a book is published. However, recommendations can go a long way, and librarians and specialty bookstore owners have always provided that. I think libraries and small or specialty bookstores will end up being more useful than publishers. The means for this to happen are being developed right now, that will enable libraries to carry self-published ebooks as well as those traditionally distributed. Print books will only be available on-demand or in much smaller lots, something that is already happening. Ebooks in libraries will have “buy now” links for readers who want their own copies, even print ones. New and effective ways for authors to reach target audiences will come about, as well. Ultimately, though, I think there will someday be little difference between indie and traditionally published authors–we’ll all own our rights, and our books will be unavailable/out of print when we decide they will.

What genres do you write?: Women’s fiction, mysteries, and creative nonfiction.