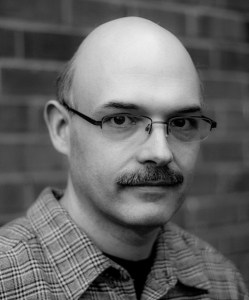 About Matthew Cox:
Born in a little town known as South Amboy NJ in 1973, Matthew has been creating science fiction and fantasy worlds for most of his reasoning life. Somewhere between fifteen to eighteen of them spent developing the world in which Division Zero, Virtual Immortality, and The Awakened Series take place.

Matthew is an avid gamer, a recovered WoW addict, Gamemaster for two custom systems (Chronicles of Eldrinaath [Fantasy] and Divergent Fates [Sci Fi], and a fan of anime, British humour (

What inspires you to write?
I’ve always had a head full of ideas. As far back as 12 years old I spent more time thinking of stories and fictional worlds than paying attention to the real one. I’m not really sure where the inspiration comes from, it’s just been there as long as I can remember. Back then, most of my creative outlet went towards developing characters, worlds, and stories for role-playing games. As age and real life reduced the opportunity for that, I’ve turned to writing as a way to let it out before too much pressure builds up and something pops.

Tell us about your writing process.
Some of my novels originated from RPG plots that I had designed and outlined with the intention of being modular enough to allow players enough room to do the unexpected without grinding to a head-scratching halt. Other books usually start as a short concept of an overall story, such as “psionic cop deals with ghosts.” For Division Zero. From there, I’ll identify the characters, create their personalities, quirks, backgrounds, and get to know who they are. After that, I open up an excel sheet and start listing ideas for stuff to happen. These are sometimes one line “fight with a demon here” or more elaborate listing of specific events that I need to keep track of for a more complicated story. This excel sheet eventually becomes my chapter outline. I’ll reorder the events while they are still short explanations, figure out chapter titles, and then transfer the whole thing to Word. Once it’s in Word, I sit down and start typing. While I do consider myself an outliner, on a chapter level I have a bit of pantsing going on as well as some chapter outlines can be one sentence as a rough idea of what’s going on rather than a paragraph by paragrah breakdown of every single thing that’s going to happen. When the draft is finished, I usually (though it’s often hard to wait) sit on it for a few weeks before going back through it on an edit pass. After that, I start asking people to beta read it and give feedback.

For Fiction Writers: Do you listen (or talk to) to your characters?
While I can’t say I’ve talked to them out loud, but I have had characters change the story on me. The most memorable example was Althea from Prophet of the Badlands. I had the outline set to go, I was about 60% through the draft… and there is one chapter where I had planned for things to go one way – but Althea had finally had enough of getting kicked around by the world she’s in, and put her foot down. It was like she was standing behind me demanding I change the story. Considering a large theme of Prophet was Althea going from a meek “all I want to do is help people” personality to finding the strength to stand up for herself, I couldn’t say no… so I wound up changing things which had a significant effect on the rest of the story from what I had initially planned.
I do tend to think of characters as real – the way people talk about someone who exists but isn’t in the room with them. Before I start writing something, I get to a point where I feel like I know the character, so even if something unexpected crops up in the writing, I know what the character would do.

What advice would you give other writers?
Keep writing. Don’t listen to those who say you’re wasting time. Show other people your writing who are interested in reading it. Expect criticism. Expect rejection. That’s how writers grow. Your writing will never please everyone, so don’t take it personally if someone doesn’t like it. Don’t try to write to what’s popular, write to the story inside you. If you force it out, people can tell.

How did you decide how to publish your books?
The first novel I wrote was Virtual Immortality, but it came in at about 250k words in first draft. When I started to research how to get published, I had a lot of people tell me that it was folly to attempt to query a book that large. (Many of whom were very sanctimonious about that sentiment btw.) I decided to write something smaller to start off with, which is when Division Zero happened. I found out about the whole querying literary agent thing so I started that. I got quite a few “this is great, but I don’t feel like the right agent for you” responses. After those piled up, I asked another author who participated in an online chat group I was in (AW Exley) if she’d be willing to read my first 5 chapters. She was published by Curiosity Quills at the time, and I was hoping to get the opinion of a ‘published author.’ Much to my delight, she agreed to read 5 chapters. A short while later, she suggested submitting it to CQ directly, which I did… and they wound up signing it some months later. I still don’t have an agent.

What do you think about the future of book publishing?
I don’t think ebooks will ever truly replace paper. They are convenient and portable, while physical books have that ‘feel’ to them that a slab of technology doesn’t. Sometimes I wonder if our society is gravitating away from printed books and reading text to more visual media such as films, but books can transport a reader far deeper into a world than a movie can. I’d like to think that books will be around for a long time to come.