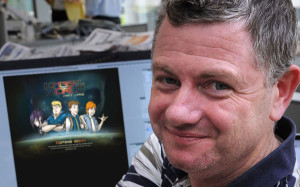 About Matt J Pike:
Like the legendary R M Williams, Matt was born in Jamestown in rural South Australia. But that’s where the remarkable similarities between these two end. While Reginald went from bushman to world renowned millionaire outback clothing designer, Matt is a complete dag who was lured by the city lights of Adelaide. Kindergarten in the big smoke was a culture shock, but it is here he first discovered his love of storytelling.

In high school that love found an outlet in a series of completely unflattering cartoons about fellow students and teachers alike. He survived long enough to further his art into a successful career in multimedia design but, like a zombified leech, the lure of the written word gnawed at him, forcing him to pen his first novel, the award-winning sci-fi comedy epic, Kings of the World. It was followed the next year by Amazon Australia dystopian sci-fi best-seller Apocalypse: Diary of a Survivor and book 1 of the middle grade Zombie RiZing series, Scared to Beath.

Matt donates part-proceeds of each book sold to find a cure for Rett Syndrome, a neurological condition the youngest of his three children, Abby, has. As a gorgeous Rett angel, Abby cannot walk, talk or use her hands in a meaningful way. So, not only is each of your book purchases a ticket to fantastically rounded, character driven, hilarious and poignant sci-fi awesomeness, it wraps you in a warm feeling that you’ve made a difference to people who deserve your help the most. Like the zombified leech it’s a no-brainer.

What inspires you to write?
I’ve always been drawn to write having started my first novel back in the olden days (when I was a teenager). After my dad passed away at 59 I realised life was too short not to pursue the things you love while you can. I wrote Kings of the World in the months that followed. It collected dust for a couple of years before I decided to use my writing to raise awareness and funds to find a cure for Rett Syndrome – a neurological condition my youngest daughter has.
I have now published three books, all with sequels on the way in 2015.

Tell us about your writing process.
With the Starship Dorsano Chronicles and Zombie RiZing books I plot out the bones of the story in advance but with the Apocalypse books (being diary format) I like to write it on the fly with no preconceived structure.
Either way, I don’t like to be too paint by numbers as I find so much of the originality and freshness of a story comes from the ideas you have on the spot – they’re also the most satisfying.

For Fiction Writers: Do you listen (or talk to) to your characters?
Not directly, as such, but my characters are always making decisions/choices I certainly wouldn’t. They often steer the ship that is the manuscript in ways I wouldn’t have foreseen before writing.
I’m also going through the process of having my work converted into audiobook. The narrator for my books – Justin Braine – does such a good job with the characters I can’t but help hear that version of their voice when I write their lines!

What advice would you give other writers?
Keep writing. Learn from each book. Get a quality editor and good cover.

How did you decide how to publish your books?
I had close encounters with getting traditionally published with both of my first two books – neither eventuated. I’m so glad I’ve taken the self-publishing route and will no longer seek old-school publishing deals.
If you’re committed to the marketing and promotion of your work, prepared to keep writing and in it for the long haul – then I believe self-publishing is for you

What do you think about the future of book publishing?
It’s a very exciting time with the predicted future growth of indie book and audiobooks it’s a great time to get involved if you haven’t already.

What genres do you write?: Sci-fi, adventure, comedy for YAs and adults alike