You are here: Home / Interviews With Authors / Interview with Author – Marvin “Knife” Sotelo 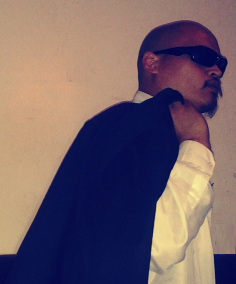 About Marvin “Knife” Sotelo:
Marvin “Knife” Sotelo better known as Knifer, is a minister and campaigner against the US drug policy as well as a musician and the author of “The Condensed Satanic Bible” known for reigniting the “new Satanic panic”. A former Democratic-Republican, Knife is now a pro-marijuana and hemp activist from the American Reform Party. He has written over a dozen books and only 5 were published, one being Yes I Cannabis. There has also been a documentary made about his life in the indie music scene. He believes that the hemp plant (as well as inmates convicted of marijuana charges) should be decriminalized because it has been shown to be less harmful then any known drug, could be a renewable source of fuel, food, and medicine, and can be grown in virtually any part of the world, and that the U.S. government deliberately hides the proof of this. He has devoted his life to the support of cannabis, hemp and marijuana.

What inspires you to write?
I wrote the better part of my last 2 books under the influence of marijuana. However, I would never claim that marijuana inspired me to write. I never experienced any sort of drug-induced epiphany during which an idea or image occurred out of thin air. Nor have the words come tumbling out of my head in an inspired frenzy á la Jack Kerouac, who, spurred by benzedrine, wrote nonstop for several days at a time. Indeed, I distrust stream-of-consciousness composition. I believe that writing should be a conscious act; otherwise, trash is the result.

Tell us about your writing process.
Write, write, write!!! I constantly write and the volume really depends on my mood and inspiration. I believe a book “takes on a life of its own” which becomes clear during editing. For example, a 200 page book begins with 400-500 pages before editing. Sometimes it is a very painful process; best described as a “labor of love”. Not everything will make the final draft because the material does not aesthetically fit or does not support the elements and topic of the book. Once a ‘working draft’ is created, I fill the gaps and add information needed to provide better support of the individual elements. By the way, I keep everything that does not make the final cut. The material is either used in future books or becomes part of a blog post. Nothing is wasted!!

For Fiction Writers: Do you listen (or talk to) to your characters?
Hell no! *laughs*

What advice would you give other writers?
I have always had a “need” to write; so just scribble thoughts, ideas or impressions. I began writing short articles for underground periodicals in the 2000s……without much ado.

How did you decide how to publish your books?
After I became an Ambassador for my church, I began writing short ‘snippets’ for new members to explain the basics of Satanism. The High Priest suggested I share my information on a larger scale and “one thing led to another”.

What do you think about the future of book publishing?
If you are an aspiring author you need to know that today most of the larger book publishers refuse to look at unsolicited manuscripts. They simply don’t have the time or resources to sort through the mountain of manuscripts they would receive. Instead, they rely on submissions from trusted agents who represent established or highly promising authors. Thus, the first hurdle authors can have is to interest a respected agent to represent them.

What genres do you write?: Religion, Philosophy, Fiction, Non-Fiction