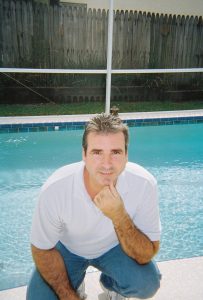 About Mark Lukens:
I’ve been writing since the second grade when my teacher called my parents in for a conference because the ghost story I’d written had her a little concerned. By the time I was fourteen years old I was reading every Stephen King book I could find at the public library. I knew then that I had to be a writer.

Since then I’ve had several short stories published and four screenplays optioned by producers in Hollywood, and one script is in development to be a film. I’m the author of many bestselling novels including: Ancient Enemy, Descendants of Magic, The Summoning, Night Terrors, Sightings, The Exorcist’s Apprentice, The Darwin Effect, Devil’s Island, Darkwind: Ancient Enemy 2, Ghost Town: a novella, and A Dark Collection: 12 Scary Stories. I’m also a proud member of the Horror Writers Association.

I grew up in Daytona Beach, Florida. But after many travels and adventures I settled down in Tampa, Florida with my wonderful wife and son, and a stray cat we adopted.

What inspires you to write?
I’ve always loved writing since I was a kid. Since my books have been published on Amazon/Kindle, feedback from so many readers and the reviews have really inspired me even more.

Tell us about your writing process.
Most of my novels (or screenplays) start with an idea, or maybe just a fragment of a story. From there I like to let the idea build, usually while I’m working on something else. But if the idea grows bigger and bigger, and I can’t ignore it any longer, I might start jotting down some notes, a few character bios, and a brief outline. Then a longer and more detailed outline. And then the first draft. I try to get through the first draft as quickly as possible, even if everything isn’t perfect (which it never is). Then I like to let it cool for a few weeks (while working on something else), then go back to it with fresh eyes to begin the countless rewrites and edits. Only when I think it’s as close to the final draft as possible do I send it to beta readers and/or editors. After they’re done with it, I read the manuscript once or twice more until I’m at the point where I’m hardly making any changes anymore. Then am I happy with it? Well, maybe a writer is never truly happy with his or her work … but at some point you have to let it go out into the world and work on the next project.

For Fiction Writers: Do you listen (or talk to) to your characters?
In the beginning of the process, my characters are kind of vague, not entirely fleshed out – some minor characters don’t even have names yet. But as I outline more and more, the characters become more vivid and alive. But they really come alive when I write the first draft, sometimes changing in unexpected ways.

What advice would you give other writers?
I always like to quote Stephen King’s advice to writers (in his book “On Writing” that every writer should read): “Read a lot and write a lot.”

But besides that, I would say perseverance is the key. You have to put in your “ten thousand hours” to master a craft, and writing is no different. You have to work hard at it, study other works, learn everything you can, and strengthen those writing muscles by writing, writing, and then writing some more.

Once you have created the best work you possibly can, then it’s time to share it with the world.

How did you decide how to publish your books?
A few years ago I was writing mostly screenplays. I had some options and came very close to having two movies made by major studios. But when I heard that some author’s e-books were being optioned by studios, I had to check it out. I read a few books about how to publish on Kindle, and then I turned a screenplay of mine into my first novel (Ancient Enemy) in late 2013. Since then I haven’t stopped writing new novels. I love publishing with Amazon – I love the creative control, I love the freedom, and I love having a platform like Amazon to promote my books on.

What do you think about the future of book publishing?
I think the future of book publishing will look somewhat like it is now, with a mixture of the big 6 publishers, small presses, and indie writers on Amazon and other sites. I believe Amazon has changed publishing in a fundamental way and they have given many writers a chance to share their books with readers, but I don’t think the big publishers are going anywhere – they may just specialize more in marquee names and celebrity books from now on.

What genres do you write?: Horror, sci-fi, thrillers, YA