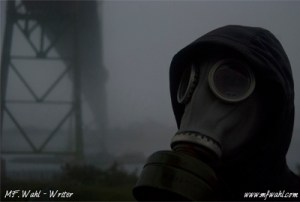 About M.F. Wahl:
As a child M.F. Wahl quickly ate through the local library’s entire sections on the paranormal, true crime, serial killers, magic, and hypnosis. By age of 11 “IT” by Stephen King was the reading material of choice, hidden in a school desk (much to the dismay of one math teacher who wrote home that Wahl “read too much!”).

As an adult M.F. Wahl spends as much time writing as possible. Days are spent funneling creative energies into penning dark tales. Nights are spent watching horror movies and TV curled under a blanket with the family. At the end of the day when eyes finally close other people’s nightmares are fuel for M.F. Wahl’s dreams.

What inspires you to write?
I can find inspiration just about everywhere. Books and articles, art, TV and movies, and often from my own dreams and subconscious. I’m drawn to the darkest regions of the human mind, and our propensity for evil. I’m inspired by it because I find the need to explore dark corners and shine a light in an attempt to explain this world we live in.

Tell us about your writing process.
I’m not much one for outlining. Once I’m struck with an idea I usually take the time to ponder it, and even sleep on it, letting my brain do the work behind the scenes. I mentally map out where I’d like a story to go, but that map is fluid enough to be written in water.

The most I do in terms of outlining is to note big plot points that I want to occur at specific page counts. This is mostly because it’s hard to remember things like that and I don’t want to recalculate constantly. It also gives me a goal to work toward with every scene I write.

For me the first draft of anything I write is more like an outline than anything. I fill in parts and chop out parts ruthlessly, always winding up with a final product that was nothing like when I started.

For Fiction Writers: Do you listen (or talk to) to your characters?
I haven’t started talking to my characters yet, but that’s mostly because once I get yammering it’s hard for anyone to get a word in edgewise! I do spend a fair amount of time listening to them though. I find it’s necessary, because they take on a life of their own, and if I don’t listen to my characters I end up forcing them to do things they wouldn’t naturally do.

As a writer it’s my job to create characters that are, first and foremost, believable. If they interact with the story in an way unnatural to themselves, the reader will never believe them and quickly become disengaged.

What advice would you give other writers?
Read, write, and don’t give up.

I think this is the mantra all writers need to say to themselves day in and day out.

You have to read to help you hone your craft. You would never expect to pick up a scalpel and do brain surgery without having read a text book and it’s the same with writing, only our text books can be any book out there.

Write, because you’re not a writer if you don’t write, it’s that simple. Write as often and as much as you can. Don’t make excuses that you don’t have time. Writing has to be a priority in you life and sometimes you have to make sacrifices. If you’re truly a writer, then writing can not be one of those sacrifices.

Don’t give up. Writing is a hard and lonely gig. Writers are a dime a dozen and even great writers are easy to find. One of the hardest things to do is to get people to pay attention and read what you’ve written, so keep at it, and believe in yourself.

How did you decide how to publish your books?
“Once bitten, twice shy” they say. I decided to self-publish because I came from the film world. I wrote screenplays for many years and for just as many years struggled. I even had a few scripts optioned, but I never had anything produced. I found it nearly impossible to get agents and producers to even read my queries, let alone a script I had written.

It’s this experience that led to my need to be independent. In the film world it’s necessary to rely heavily on others to get a script made into a movie. Self-publishing was an opportunity to step away from that reliance and do it myself. I’ve always had a knack for DIY, so I figured I’d give this a go.

What do you think about the future of book publishing?
I think the big publishing houses will always be there, but I think smaller presses will soon find themselves squeezed for talent. Many very good authors are setting out to do it alone because there is less rejection, and more reward.

With publishers the author has to send out all those soul crushing queries, and if they get signed, they still do the marketing for the book themselves. From flying around the country for book signings, to blasting sales out on social media, it’s all author generated. Unless you’re a huge name at a huge company, there’s just no budget for you, and if there is, it ends up coming out of your cut in the end anyway. Many authors feel jaded by the system because they don’t see more sales just by virtue of being with a publisher.

If an author has to do all or most of the work, foot the bill, and does not see a great ROI, they don’t see the point of being with a publisher at all. Why go though the major hassle of securing a publishing deal for the same outcome as self-publishing?

That being said, the tide will eventually turn again, publishers will offer more ROI but will become more selective about who they sign, forcing many self-publishing anyway.

To wrap up my thoughts on this: self-publishing is here to stay and so is big press.

What genres do you write?: Horror & SciFi