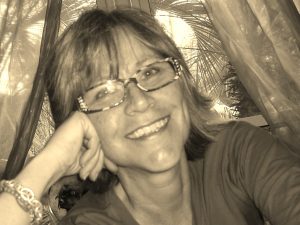 About Lynne M. Hinkey:
Lynne is a marine scientist by training, a writer by passion, and a curmudgeon by nature. An Olympic-caliber procrastinator, she honed her skill through years of practice and dedication to living on island-time. She uses her experiences from 16+ years of working and playing in the Caribbean to infuse her novels with tropical magic, from the siren call of the islands to the terror and hysteria caused by the mysterious chupacabra.

Her short stories and essays have appeared in The Constellation International Literary Review, Skylines, The Petigru Review, Infective Ink, Two Hawks Quarterly, and other print and online publications. Lynne’s debut novel, Marina Melee, was released by Casperian Books in 2011, followed by Ye Gods! A Tale of Dogs and Demons (2014). Look for the sequel, The Un-Familiar: A Tale of Cats and Gods, coming from Casperian Books in July 2016.

When not busy writing or procrastinating, Lynne is an adjunct associate professor of biology. She lives in Charleston, SC with her husband, cat, and two dogs.

What inspires you to write?
My imagination acting on the real people and ideas around me. My stories are very much character-driven because imagining how people might react in real, but slightly skewed circumstances fascinates me. Having people confront something new and unusual, just a hair’s width away from what’s plausible in their own concept of reality, then imagining the range of emotions and reactions that can elicit intrigues me. Ideas that strike me as both ludicrous and ‘real,’ like the illusion of living the “easy life” on a tropical island–the plot in my first novel, “Marina Melee.” Part of that was inspired by my experiences when I was a full-time college student in the Virgin Islands, juggling my studies with a full-time waitressing job. I’d be tired and sweaty, schlepping hamburgers from a hot kitchen out to sunburned tourists, and they’d invariably say something like, “It must be great to live here and just hang out at the beach all the time.” I’d just nod and say, “Sure…it’s like being on vacation all the time.”

My second novel, “Ye Gods!” started as a spoof on the vampires, with Puerto Rico’s own vampire-like chupacabra as the star. All these movies and shows were coming out with the idea that these horrible monsters can be made good through the power of love. I thought, what if the horrible monster truly is the good guy, a deity, in fact, but humans have bungled the concepts of good and bad so much that we can’t tell the difference? Building a plot around those kernels of an idea, getting a complete story out of it, is challenging and fun.

Tell us about your writing process.
I not only prefer working with an outline, but I love the process of plotting out my entire story. I follow a pretty structured process, although there’s a lot of flexibility within that process. I’ve done most of my writing in my head before I write a single word. I need to know where the story is going, the main plot points along the way, and how I’m getting there, otherwise I end up with a meandering mess. Once I have that main idea mapped out in my head, I outline on paper. First, I roll out butcher paper on the dining room table, break out the colored pens, and using a different color for each character, map out key plot points for each character with arrows showing where their stories intersect. Then, I figure out where natural chapter breaks occur and block off chapters and scenes. Finally, I use index cards to outline each scene within a chapter. That way I can rearrange them or change whole scenes, if it makes sense as I write. Since it’s all written out and color-coded, if I do make a change, I can fairly easily edit to ensure that the change is carried through consistently from beginning to end. By the time I start to write, the story and characters are like old friends. They can still do things that surprise me and change the story, and I allow for and even expect that, but I can also discriminate between a valid change and an unnecessary tangent or detour and so avoid taking it.

I know some writers argue that outlining kills spontaneity and creativity, but for me, all that spontaneity happened in the mental part of planning, and my job is to capture that plan and retell the story that already played out in my head, so it’s equally creative and spontaneous, just at a different time in the process. It also becomes an iterative process, so the writing alters the outline and vice versa as I go. I find I have far fewer rewrites later on because I already did them in my head and in my outline beforehand.

For Fiction Writers: Do you listen (or talk to) to your characters?
All the time! I somewhat follow Stephen King’s approach on describing characters physically, beyond a few key points–leaving something to the reader’s imagination. But, in my mind, I know how each character looks, how their voice sounds, and their mannerisms. When I’m deep into the writing process, I typically spend the whole day alone with the characters in my head and on the computer. When my husband comes home from work, I’ll start telling him a story beginning with, “You won’t believe what so-and-so did/said today.” Now he’s gotten to where he’ll stop me and ask, “Is this a real person or one of your imaginary friends?” before letting me finish.

What advice would you give other writers?
Write your story, the way you need to tell it, but don’t stop there. Learn all you can about the craft, learn more, and then keep learning. It’s fascinating and fun and if this is really what you want to do, don’t let anyone dissuade you from it, but don’t settle for less than your best, either. It’s hard to go slow with so many easy options to write, “the end,” and send it out into the world. Edit, edit, edit some more. Hire an editor, join a critique group, send out 100 queries before you self-publish–even if you know you’re going to self-publish, even if they’re all rejected. You’ll get valuable feedback, and being able to encapsulate your story in 2-3 sentences is an essential skill, so that’s a great way to hone it.

How did you decide how to publish your books?
With my first novel, I went through the process of querying agents and received the requisite stack of rejections, a few “gee this is great, but not for us” letters, but that was it. At a writer’s conference, some agents suggested establishing a publishing record first by looking at small, indy publishers. Those agents also emphasized that “money flows to an author” and cautioned against some less-than-scrupulous publishers who didn’t care about quality because they made their money off the author, not off book sales. My finding Casperian Books must have been fate because another publisher, that was no longer publishing fiction, referred me to them, and at the same time, another writer suggested I try them. I was determined not to self-publish or use a vanity publisher, mostly because I have a delicate ego and didn’t trust my own judgement on whether or not the manuscript was ready and good enough. I needed someone who believed in it as much as I did, and who thought it was good enough to invest their time and money in and trust it would sell well enough for me and them to earn back that investment and more.

For my second novel (“Ye Gods!”), I gave myself six months to query agents before I’d query Casperian and/or other indy publishers (because even if an agent or publisher accepts one manuscript from you, it’s no guarantee they’ll accept others–each has to stand on its own merits). When I had a number of requests from agents for exclusive reading periods for the ms, that extended my six months to over a year. I got terrific feedback that helped polish up the final ms, but no takers, so returned and thankfully, Casperian accepted it. Since my third, (“The Un-Familiar”) is the sequel to “Ye Gods!” I went directly to Casperian. I am very happy with them–they’re great to work with and do a fabulous job putting our quality products, but I do still harbor the hope of finding an agent and getting a publishing deal with one of the Big-5.

What do you think about the future of book publishing?
I think it’s quite exciting. So many we ready to declare the death of paper books and indy book stores with the advent of e-readers and big block bookstores and Amazon, but Amazon has turned into the indy publishing houses’ and indy authors’ best friend, and as it turns out, indy book stores are on the rise. More readers, more writers, and more options for both is a wonderful thing.

What genres do you write?: Commercial fiction, fantasy (magical realism)