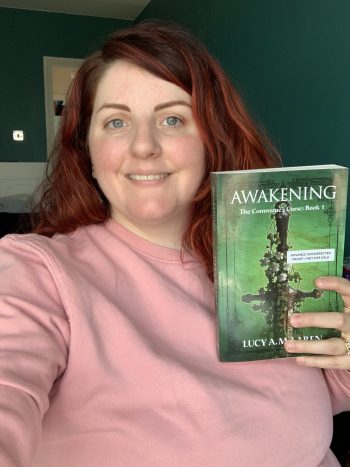 About Lucy A. McLaren:
I am a fantasy author and professional counsellor, passionate about writing stories that include a realistic representation and exploration of mental health issues. My debut novel, Awakening: The Commune’s Curse Book 1, releases from SFWP
on 1st May 2022.

What inspires you to write?
I would say it’s all of the other fantasy stories that I consume (and have done since childhood) in multiple forms, including books, video games, films and TV shows. Favourites include His Dark Materials by Philip Pullman, Lord of the Rings films, Legend of Zelda: Majora’s Mask, the Marvel cinematic universe, Horizon: Zero Dawn, and The Witcher (TV show and game!).

What authors do you read when you aren’t writing?
Ooh so many. Philip Pullman, Robin Hobb, Joe Abercrombie, Stephen Deas, J.V. Jones, George R.R. Martin… the list goes on. These have all inspired me over the years in becoming a writer.

Tell us about your writing process.
I tend to be a seat of the pants writer. I will do a vague outline so I know roughly where things are going, but quickly get bored of this and want to dive into the action. I find it really exciting not being 100% sure on where a story is going before I start writing. My subconscious always seems to be a step or two ahead and will produce scenes and characters out of nowhere while I’m writing. I used to write every day before I had a baby, but since I had him in summer 2021 I’ve found this far more difficult. I now have to write on my phone when he’s napping, which isn’t ideal but it’s slowly starting to feel easier.

For Fiction Writers: Do you listen (or talk to) to your characters?
I sometimes imagine my characters are sitting and waiting for me between scenes. I don’t talk to them but I can quite clearly hear them conversing with each other in my head.

What advice would you give other writers?
Everyone’s writing method differs a bit, so don’t feel you need to rigidly stick to writing rules. Do what works for you and be kind to yourself.

Before I had a baby, I would aim to get at least something written every day (whether that be 100 or 1000 words, it didn’t matter). Since I’ve had a baby, I’m not able to do that anymore and I will be pleased to get any writing done in a given week—though, as I mentioned, it’s getting easier to fit in writing around him now.

How did you decide how to publish your books?
I pursued traditional publishing, but I think either route is totally legitimate. I personally wanted to have the expertise of a publishing house behind me because I felt totally clueless going into querying. I would say explore what feels right for you. Look at the options and see which is best for you.

What do you think about the future of book publishing?
I hope that there continues to be growth and opportunities for authors in minority groups who have previously been shut out of publication. There seems to be some awareness of this lately but I think there’s still a long way to go.