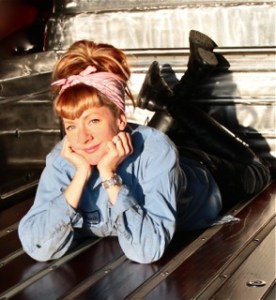 About Lori Bentley Law:
Lori Bentley Law is an award winning television news photojournalist for NBC Los Angeles, a job that has taken her around the globe, and given her a front row seat to some of the most amazing and tragic events happening in our world today.

Outside of news, she worked as principal photographer on several episodes of the half hour weekly show Travel Cafe, shooting in Fiji, Hong Kong, and Kauai, to name a few. She also completed a documentary on nationally renowned artist, Milford Zornes—one of the coolest human beings she’s ever met and someone she hopes to be like when she’s 90.

She lives in Southern California with her best feller, a whole bunch of misfit motorcycles, and of course, her ’48 Ford Truck, Bondorella.

What inspires you to write?
Writing fiction gives me an escape from the harsh realities of the news business. As all writers will say, I’ve had stories floating around my head for as long as I can remember, and started writing them down as a kid. When an idea hits me, I’m compelled to get it down in words.

Tell us about your writing process.
You can’t force a story out of you (well… you can, but it wont be good). Writing, however, does take tremendous discipline. For me, I need to know where I’m going, so yes, I outline. Does the final product always resemble the outline? No. Sometimes characters will take you in a different direction, but if you know the beginning, middle, and end, you at least have a goal to write to. I LOVE Scrivener, a writing program. Why? It lays everything out at a glance. I can bounce around chapters without having to search within a Word doc. I can add pictures and notes and character sketches. It’s totally awesome, man. And speaking of character sketches, they are SO important. If you don’t KNOW your character inside and out, you can’t write them with depth.

For Fiction Writers: Do you listen (or talk to) to your characters?
My characters are living breathing entities. I listen to them. I talk to them. I dream about them. They live in me while I’m working on a project, which helps to make them truly authentic.

What advice would you give other writers?
Don’t simply TALK about being a writer. Do it. Plot your story out in detail. Get to know your characters. Don’t try to write with VOICE, just be yourself and get the story down. And whatever you do, don’t keep going over and over and over chapter one. Move forward or you will forever be frozen on the first page.

How did you decide how to publish your books?
I got lucky. An agent fell in love with Motor Dolls. I signed with her. We began the shopping process–but first, she wanted me to make a major change: to switch to YA. Quite frankly, it didn’t work. I knew it wouldn’t work, but I trusted my agent, and went that direction. She shopped the novel for a year, and while we had interest from a couple of major players, we ultimately didn’t make a sale and my beloved novel was dead in the traditional market. So… after several years sitting on a shelf, I put the book out on my own, and have no regrets. I recommend giving the traditional route a try, but being open to options. More than anything, DON’T RUSH A BOOK to self-publication. Make sure it is absolutely the best it can be.