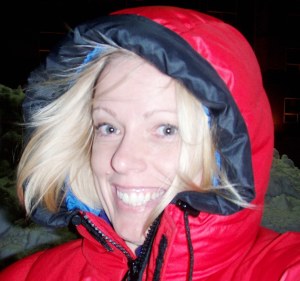 About Kristene Perron:
Kristene is a former professional stunt performer for film and television (as Kristene Kenward) and self-described ‘fishing goddess’. Pathologically nomadic, she has lived in Japan, Costa Rica, the Cook Islands and a very tiny key in the Bahamas, just to name a few. Her stories have appeared in Canadian Storyteller Magazine, The Barbaric Yawp,Hemispheres Magazine and Denizens of Darkness. In 2010 she won the Surrey International Writers’ Conference Storyteller Award for BIRDS ALSO CRY. Kristene is a member of SF Canada.

She is the co-author of the five-book, adventure science fiction series Warpworld, which she pens with Joshua Simpson. The first three volumes–WARPWORLD, WASTELAND RENEGADES, and GHOST WORLD–are available now. The fourth book is scheduled for release in 2016.

Kristene currently resides in Nelson, BC, Canada but her suitcase is always packed.

What inspires you to write?
Everything, everywhere. I’ve been lucky enough to live a nomadic and unconventional life, and have learned first hand that truth truly is stranger than fiction.

Tell us about your writing process.
Because I write with a partner (a process of its own), and write a series with a multitude of characters and intersecting ploy lines, outlining is a must. I’ve recently made the leap to Scrivener and will never look back. Another tool Joshua and I employ frequently is our character questionnaires, which we fill out from the POV of each character. We’ve often been complimented on the depth of our characters and I chalk this up to the amount of work we do “playing” with them before we let them mess around in our plot. If you’re an aspiring author and would like a copy of our character questionnaire, I’ll happily share that with you. Contact Kristene at info@warpworld.ca

For Fiction Writers: Do you listen (or talk to) to your characters?
When we write, Joshua and I select which characters we will “play” in a given scene. Often I have no idea how Josh’s characters will react and vice versa. This means we can set out a framework but we must let our characters talk to us and tell us what they want to do within that framework. There’s no other way we could deal with the curveballs thrown by our co-author.

What advice would you give other writers?
Put in your time. Learning craft is fantastic but it’s hours in the chair and words on the page that count. Writing is a bloody difficult job so the sooner you start nailing down your self-discipline the better. Never stop working! (Except for washroom breaks, food, sleep, the occasional vacation, and cat petting).

How did you decide how to publish your books?
Joshua and I took the traditional route at first. We had a prominent NYC agent who shopped us out to the big six (at that time) publishers. The general response was, “Loved the story! Great writing! But I can’t market this. Sorry.”

We had already discussed indie publishing as an option and instead of going after medium to small publishers, we chose to do it ourselves. It’s been a ton of work but also extremely rewarding.

I think every writer has to choose their own path. Indie publishing is not easy and can easily start gobbling up all your writing time if you’re not careful or don’t know what you’re doing.

What do you think about the future of book publishing?
I’m excited! Aren’t you? There are so many possibilities out there and more every day. This is a great time to be a writer!

What genres do you write?: I writer primarily speculative fiction, which includes science fiction, fantasy, horror, and all their various sub genres