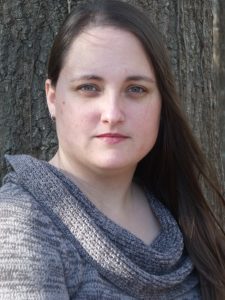 About Kari Holloway:
Kari Holloway is an American writer who grew up in Leesburg, Georgia. She dabbles in southern romances filled with iconic components of sexy cowboys and firefighters, explored the unexplained in her paranormal series, found her way to the battlefields of the Civil War, and to love's first kiss under the weeping willow through various anthologies.

Unsure of what her future holds, Kari enjoys writing what captures her attention in the evenings. During the day, she chases her kids around, laughing at their sassy ways and the depths of their curiosity.

She enjoys vanilla ice cream, playing with critters (including the creepy ones like spiders), and playing video games.

Her motto in life: Show the world the best version of you, for our actions of today make tomorrow.

What inspires you to write?
To be rather honest, I was bored when I started writing again. I wasn't used to being a stay-at-home mom and needed something stimulating to do. I haven't been able to stop since.

Tell us about your writing process.
I'm a pantser. I have a general idea of maybe a scene and start at the beginning to either get there or what happens after there.

For Fiction Writers: Do you listen (or talk to) to your characters?
My characters don't shut up. It's been over a year since I finished the Laughing P series, and Maw-Payne still likes to chat my ear off (that might be why she's got her own blog now).

What advice would you give other writers?
Finish the draft before worrying about the little things. You can't fix what isn't there, and finishing the story's draft makes it easier to fix the issues you have with it (like characters not sounding distinct or not having the right word).

How did you decide how to publish your books?
I'm a control freak so I went self-publishing. I believe that understanding the process made me respect traditional houses more, but that doesn't mean that I would jump both feet into a traditional contract if offered. It would have to be a company that would give me the freedom to do what I do now (run promos with little notice, find me interviews to do, etc).

What do you think about the future of book publishing?
Something big is going to cause authors to migrate away from Kindle Unlimited. It might be the partnership between Walmart and Kobo.
Traditional Publishers are going to have to up their game in terms of not producing the same recylced story lines because it "sells well".