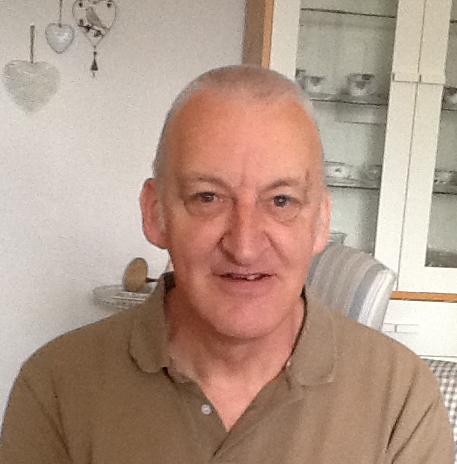 About Jonathan Trahair:
Devon born and bred (but with Cornish overtones), I lived in Devon for 48 years except for school in Dorset and 9 months of fun and mayhem working on a farm in Lincolnshire. Since 2004 I've lived in Spain with my wife and the dog.

In 1975 I went to work on a farm in Cornwall for a year before going to agricultural college in Devon for 4 years, where I learned how to grow 2,000 hectares of potatoes – and not to go farming when I left. I’d passed my HGV test so I bought an old tipper lorry and ran a spectacularly unsuccessful haulage company for a while, then gave it all up and worked for different small companies for ten years or so during the 1980’s and 1990’s – either exporting Swiss chocolates from Switzerland to the Far East, or selling and installing industrial factory and warehouse equipment in the West Country.

Then I started to write better business computer programs than the ones we had at work, and I’ve been doing that ever since. That’s the day job. So far, anyway.

When I wasn’t doing that, I was often to be found playing the organ in a local church for Sunday services, and singing in choirs – and occasionally conducting them, too. This began at school, when I played the piano for a service in the school Chapel for the first time aged 13. By 18 I was organist of a small parish church on the south western slopes of Dartmoor, and I’ve been the organist or keyboard player of any church I’ve been to ever since then.

I am married with two daughters, one grandson, thirteen step-grandchildren and three step-great-grandchildren (at the last count). Plus the dog, of course.

What inspires you to write?
I have loved reading ever since they stopped forcing me to do it. I read and re-read books in a wide variety of genres – from CS Forester (not just Hornblower but all his other books too), Bill Bryson (the travel books, Shakespeare, and his books on history and language), Jasper Fforde (the Thursday Next series), Lindsey Davis (the Marcus Didius Falco series) and PG Wodehouse, Robert Harris, Cornelia Funke, Douglas Adams, Hammond Innes, and more. I keep discovering new ‘favourite authors’. My wife reads even more than I do (I have to work), and I think we’re the only private house in southern Europe with its own library.

I haven’t always been a writer – far from it, I only published my first book on Kindle this year (2015). I tried writing a few short things, off and on throughout my fifties. I did a short series of 6 aspects of having a log fire, called Six Pieces Of Wood. I did a short piece on my idea of what Heaven will be like. I even did a very short children’s story called Grumble And Auntie Blorat Go Shopping, the names based on my two year old (as he was then) grandson’s inability to say Grampa and Auntie Florence, one day when it rained and we all went to a monkey sanctuary in Dorset. Needless to say, everyone thought Grumble was a good name for me. Apart from Six Pieces Of Wood, which was read enthusiastically on Kindle when I gave it away for free one week, the others here have only been read by members of my family. Well, they said they had read them.

So why do I write? Just so that I can create my own characters and stories, and see them come to life.

Tell us about your writing process.
The advantage with fiction is so that you don’t have to do extensive research – or so I thought. My book Just Some Old Letters turned out to require quite a lot of research specific to a historical period, although the story is set in today’s times. I started off well – I sketched out a timeline of events, but I wanted some of it to be discovered backwards, that’s to say the heroine had to discover the last thing first, which referred to an earlier event which she then had to discover, and so on. There was a lot of cutting and pasting, and that was before I began the actual book!

I wanted to have a mental image of some of the characters, so I went on-line and chose some images as close as possible to how I imagined the characters to be, and I kept these images in a document file. I added other images, quotes from internet searches and so on. This file grew and grew as I used it as a memory aid, so if anyone says to me, ‘where on earth did you get that idea from?’ I can show them.

Then I took my timeline and wrote the story in between the summarised events. Later on, I decided to insert the winter of 2014/2015 into the middle of the story, which went in surprisingly easily thanks to my timeline.

I work for myself (my day job) so I could stop for a few minutes (or hours, I admit it) and add a new bit to the book, or re-read the latest section yet again. Or read the whole book again, on really slow days.

I asked my wife and grown-up daughters about things I (as a mere man) had no clue about, such as what a young woman would do or think (or wear) in certain circumstances, and to ask about characters from current films I haven’t watched.

Eventually, when the amount of editing, changes, spelling corrections and pointless revisions dropped below a certain level, I reckoned the book was ready.

For Fiction Writers: Do you listen (or talk to) to your characters?
The more I write about a character, the better I get to know them, and what they would do or say – just like making a new friend in the real world. Having an actual photograph of someone helps to prevent the gradual change of a remembered or imagined character ending up different to how they were when I started. Many characters share certain features with real people I know, and I hope the real person never catches on. My wife, of course, can see parts of herself in a number of different characters, and some favourite expressions and events we are both familiar with have crept into the story, as a gentle nod towards a moment we both cherish. I’m not telling you which moments these are, though. Sorry.

What advice would you give other writers?
Read a lot. Try to determine why you like (or don’t like) a book. Start small. Send short pieces of your writing to family, friends, neighbours and steel yourself to hear their reactions, if any. Use Spell Check. Search and replace double spaces with single spaces. Don’t have a space to the left of any punctuation. Be consistent – for example if you write ‘timeline’ once, don’t write it as ‘time-line’ or ‘time line’ later.

Bear in mind you’ll have to think up a good blurb, buy or create a good book cover. Publish your book and some short stories or other pieces to give away so as to attract readers to your Amazon page.

How did you decide how to publish your books?
Years ago I helped someone write and produce a real book – involving the local printing firm, ISBN numbers, a book launch party, delivering copies to bookshops and so on – and what to do with 499 unsold copies afterwards.

This time I thought I’d try something less expensive. My day job involves me sitting at my computer all day, so ebooks are an obvious choice.

What do you think about the future of book publishing?
Humans have been writing things down for thousands of years – this will never change. What they write them on? Well, things may come and go – ereaders, computers, iPads, paperbacks, papyrus scrolls or stone tablets. Though I notice stone tablets are still around today, whereas books written on an Amstrad or Atari or BBC computer are probably lost now.

What genres do you write?: Mystery with added romance and a spot of history.