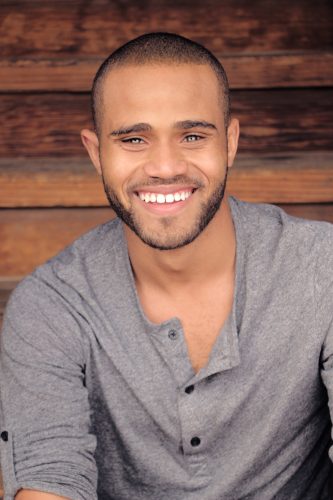 About John W. Wells III:
Hello! My name is John Wells III. I love long walks on the beach and candlelit dinners— Okay, I am only joking—Well, not about the long walks on the beach. Or the dinners, But that is because I'm a San Diego Native, and who doesn't love the beach and tacos? So let's see, about me. Well, I am a nerd with a wild imagination. I love fantasy and the supernatural, which is why I write about them. I picked up my first Animorphs book in the third grade, and I haven't left the genre since. (I know, I know, Animorphs is more science fiction, but eight-year-old didn't know the difference). It got so bad that I even thought I was an Animorph for a while. I wish I were joking, but I am not.

I love telling stories in all forms: books, plays, movies, etc. I am also a loving dog dad of two beautiful pitbull mix-breeds. But enough about me, let's talk about you!

What inspires you to write?
When I was a kid, I LOVED fantasy. Harry Potter, The Chronicles of Narnia, the Lord of the Rings, even the Percy Jackson series (though I was a little older when that came out). But the one thing I never saw, as a kid, was a hero that looked like me.

As an African American, I wanted kids to see heroes that looked like them, among the myriad of eurocentric protagonists. I wanted BIPOC kids to know that they are more than just the sidekick. So I wrote one.

When people tell me they read my books, they tell me that they were inspired by the diversity represented in my books. And this inspires me to keep writing.

What authors do you read when you aren’t writing?
Rick Riordan. My love for him started with his fast-paced and witty, Spider-manesque dialogue. Which I already said I am a sucker for. But it was sealed when I realized how inclusive he is in his writing. As a result, he has been a massive inspiration for my writing.

Tell us about your writing process.
I am a planner. I have tried pantsing (Writing without an outline), but it usually results in me writing in circles until I have something that makes very little sense.

Because of this, I start each book by writing a detailed outline. And even if that outline changes, at least I have an idea of the direction I am going.

My process of writing an outline is relatively simple. First, I write bullet points on google docs. Then, I try to break the outline into chapters and know what I need to happen in each chapter. I do this so that all I have to do is write and not waste time thinking about plot points when I start.

Once I begin writing, I am unusual because I prefer to write early in the morning. I do my best writing before the sun comes up. So I will wake up (around 4 am or 5 am, although recently it has been more like 5 am or 6 am), and I will write for about four hours. Then I’ll take a break. If I can, I will write all day, but that is rarely something I can do.

I try to push a lot of my administrative tasks for the late afternoon because, for whatever reason, my brain is a little less creative during those hours. So I do my marketing and other jobs at that time. And then, of course, my favorite part of the writing. Once the first draft is done, I can start working on rewrites with my mentor and coach. After that, he and I will go back and forth on manuscript edits. Once we feel the manuscript is in good condition, I will send it to Beta readers. Then, after a few rounds of back and forth with the beta readers, it is off to the editor.

For Fiction Writers: Do you listen (or talk to) to your characters?
I do a little of both. When I have a good grasp of a scene, I see it like I see a movie, so I write what I hear the characters say. But, sometimes, I do not have an excellent grasp of a scene, so the characters tell me what they want. Then, I tend to argue with them because I don't understand it or understand how to get them out of the situations they like to get themselves into.

What advice would you give other writers?
Just write! It is the most basic advice you can receive but the easiest to forget. Don't go back to edit while you are writing. Let go of perfection during the writing process, and just get the story out of you. True magic is made during the rewrite, but before you can uncover those hidden jewels, you have to get the story out of you. So just write!

How did you decide how to publish your books?
It started with the age-old question, traditional vs. self-publishing? I did extensive research on both when I decided to publish, and I landed on what made the most sense.

Traditional publishing gives you access to a wealth of resources; editors, Publishers, Publicists, and a marketing team who will help get the book into the hands of the right distributors. They are experts on the market and know how to push a book. The downside is you have to get past the "gatekeepers." There is a strong weeding out process, and the problem I have with the gatekeepers is that somehow, they get to decide what the "market" wants. This is the very reason there have been several decades without ANY protagonists of color in certain genres because the "gatekeepers" have decided that a hero of color would not attract readers.

Not that I think I know better, but why would I want to pursue the approval of a system that has proven time and time again that they do not value stories about people who look like me?

Because of this, I decided to publish under the name of my own independent publishing house. I believed that I had the marketing ability and just the right amount of audacity to make it work for myself.

The only access to an audience was the publishing houses in the past. Now, we have the entire internet at our fingertips. And it is time to take advantage of it. Everything is digital. And now, there are more ways than ever to reach readers. But, first, you have to figure out where your readers are and then think outside of the box to reach them.

What genres do you write?: Contemporary Fantasy