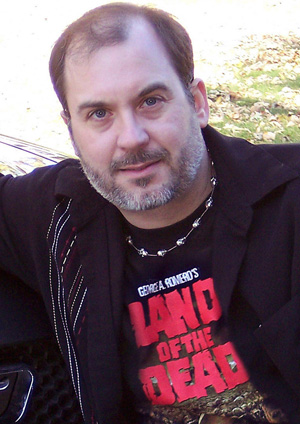 About John Everson:
John Everson is a staunch advocate for the culinary joys of the jalapeno and an unabashed fan of 1970s European horror cinema. He is also the Bram Stoker Award-winning author of eight horror novels, including the erotic horror tour de force and Bram Stoker Award finalist NightWhere and the occult / urban legend mystery of The Pumpkin Man. Other novels include Covenant, Sacrifice, The 13th, the spider-driven Violet Eyes and his latest, the Fountain of Youth horror of The Family Tree. His tales have been translated into Polish, French, Italian and German and optioned for potential film development. Over the past 20 years he has published more than 125 short stories, many of which are collected in the books Cage of Bones & Other Deadly Obsessions, Vigilantes of Love, Needles & Sins, and the upcoming Sacrificing Virgins. John is also a musician, digital collage artist and the founder of Dark Arts Books. Find out more about his books, art and music at his website, listed below.

What inspires you to write?
I’ve always loved books and stories. There’s nothing better than slipping into another world thanks to a book… after being a voracious reader growing up, I decided early on that I wanted to try creating the same kinds of worlds that entranced me. I wanted to “give back” for all of the enjoyment I’d had from stories. While I grew up reading science fiction, I found that all of my story ideas were more “Twilight Zone”-ish — they had less science and more “evil twist.” I guess my fascination with haunted houses and gothic imagery and TV shows like Twilight Zone, Outer Limits, One Step Beyond and Alfred Hitchcock Presents informed my story-building sense more than all those sci-fi novels I read!

Tell us about your writing process.
Usually whether it’s a short story or a novel, it starts with an image in my mind — a character discovering something, or in a particular peril. Then from there, I think it through and try to identify the why/how/where of the tale. So before I begin writing, I might have a one or two paragraph boil-down synopsis on my computer of what the story “is”. My first three novels were totally seat-of-the-pants projects — aside from a couple of guiding paragraphs, I didn’t use an outline — I essentially told the story to myself as I wrote, making it up as I went along. That’s also the way my last couple novels have been written, and it’s my preference. For my 4th-7th novels, however, I had to create outlines ahead of time. I sold those to a publisher based on the outline, before I wrote them… so I had to give my editor a pretty good idea of what the books were going to be before they’d give me a contract. There is some value in outlining, since you stop yourself (perhaps) from digging yourself a plot hole that you can’t easily get out of. But I find them constraining too, since then it sometimes feels like the book you’re writing is “paint-by-numbers,” even though you yourself created the numbers. Even the novels I outlined though, tend to have a lot of things happen in them that I never thought of when I crafted the outline. So they still had the fun of “discovery” for me as I worked.

For Fiction Writers: Do you listen (or talk to) to your characters?
I’ve never really understood the whole thing about “talking” to your characters. Doesn’t that kind of habit usually bring out the men with the white coats? As the author, I consider myself more a chess player, playing against myself. I set up a problem and then try to find a way for my characters to solve it without dying. Sometimes, the situation dictates that they aren’t successful. So far, none of them have complained to me about this.

What advice would you give other writers?
Write what you would want to read. I’ve always done that in my career, and I think it helps sustain you when you find yourself having a hard time selling a story. At least you can feel good about having written something that YOU enjoyed…

Another thing that is useful craft-wise is to read your stories out loud, at home in the mirror or at a local open mic night. I used to attend a weekly fiction reading night in Chicago, and reading my stuff out loud to an audience was a great way to find where things worked or didn’t work. Did the audience laugh at the jokes? Did the dialogue come out sounding natural, or clunky? Were you repeating one word over and over? All things that you can learn from doing a live reading that you don’t pick up on sitting at your computer.

How did you decide how to publish your books?
I started writing seriously because I wanted to have books in bookstores, like all those books that I discovered as a kid. Self publishing to me was always a last-ditch, vanity option if you had exhausted every other publishing option. The age of e-books has changed that sentiment in me… a little bit, but not a lot. If you want to have your books on shelves in stores across the country, you still have to sell your work to a real publisher, and typically, one that has a NYC mailing address. I worked at writing and submitting my work to agents and publishers for over 10 years before I finally scored my “big NYC deal” and over the next few years, I released five novels through them. It was the realization of a dream for me. Ultimately, the rise of e-books killed that publisher, and Amazon’s 47North label bought my older titles, while my newer ones are coming out through Samhain Publishing. I’ve self-published a couple of reprints at this point, but only books and stories that had been previously published through a legitimate publisher first. So I still hold the “you should sell to a real publisher” prejudice pretty strongly. That said, it’s been a lot of fun to republish and market my older books under my own label — Cage of Bones, Vigilantes of Love, Failure and Violet Eyes.

What do you think about the future of book publishing?
I think that we’re still in the Wild West of e-books and self-publishing. And I think that while indie authors will continue to find it a useful outlet, I think the result of having “no bar” in stopping people from self-publishing has simply meant that the market is now insanely crowded, and it’s impossible for authors to be heard above the din. EVERYONE has an ebook to promote. So what is the future? Eventually “big publishing,” or some successor to it, will rise and become the tastemakers again for book publishing. Readers will demand some kind of arbiter to ensure the books they’re downloading have had some quality controls in terms of editing, good storytelling, etc. In order to sell your books, you need marketing these days more than ever — which costs money. “Big pockets” will ultimately prevail, because the old adage remains true — it takes money to make money. Which is why there are big publishers, big record companies, etc. While they’re often reviled, they have the resources to make their artists household names.

What genres do you write?: Horror, dark fantasy, occasional sci-fi