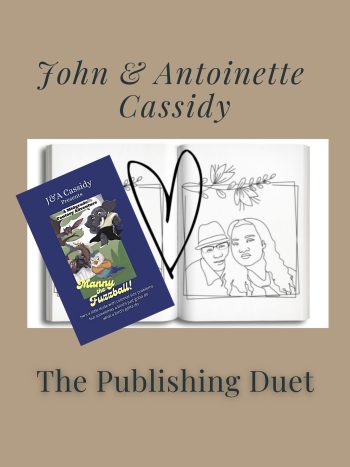 About John Cassidy:
One of the remarkable parts of authorship is that everyone begins at the same starting line, without all the hoopla and fanfare. This… is their story
Manny the Fuzzball! is a wondrous fantasy adventure, but it is not their first. The Cassidy’s have written two other works, as well as Liv’s 4-Legged Turnabout, of which they freely give you on their website.
The Cassidy’s are creative writers with adventurous souls. When they write, their passion for animals, friendship, and girl power splatter across each and every page. As well as gobs of humor and daring-do
John is a retired Navy man. Antoinette has worked with children and healthcare for many years. The Cassidys live in the sunny state of California where they are currently working on their next project

What inspires you to write?
Producers and writers inspire us to write. Those who actually care about their characters, whether they're the good guys or the bad. Not just kill them off for shock value. If you're in love with your characters others will be too.

What authors do you read when you aren’t writing?
I like Roger Allers-The Lion King. The writers of The Chronicles of Narnia. And J.R.R. Tolkien-The Lord of the Rings

Tell us about your writing process.
When I have an idea for a story, I start right then and there. Whether it's in the middle or at the end of the story. And then I build my story around that. I might have five ideas that are splattered all over the book. Then I put the book together like a puzzle. I am not an outliner. And I do not believe the main character has to grow and learn in an arch for a book. I do believe the intensity of the plot should arch.

For Fiction Writers: Do you listen (or talk to) to your characters?
When I'm writing and totally into my characters, they literally take over the story and take me on a path I had no plans of going. And I love it when that happens, because, I feel, that's when the fullness of their personalities comes out. And yes, I do talk and conversate with my characters.

What advice would you give other writers?
If you have a thought, put it down on paper. Thoughts are on the wind. If you don't write it, someone else will. And just write ugly. It's okay if it's messy. You can clean it up later. Just get it down. Trust me on this.

How did you decide how to publish your books?
Publishers can be unfair. They all have something distinctive they are looking for when you submit. But we writers don't have a clue what that is. And then they say, send the first ten pages. All the exciting stuff isn't there yet. Then they say, they'll get back to you in 3 to 6 months. No fair! I'd be old and gray by the time someone says yes. I was left with no choice but to self-publish. And I am glad I did. I learned so much about the process

What do you think about the future of book publishing?
I believe everything, absolutely everything is going to be computerized. The big publishing houses will only be online. No more bookstores or anything. And I think that's just horrible. But here's the thing, I think when it's all gone, and everyone is living off the computer, someone is going to open a little book store. And everyone is going to flock to that precious little thing. And thus will begin a trend of building bookstores again. There's nothing like feeling a book between your fingers. Books and imagination are forever. And our children deserve a chance to enjoy that feeling too.

What genres do you write?: we are midgrade fantasy writers