You are here: Home / *Reading Room / Interviews With Authors / Interview with Author – John and Shelia Chapman 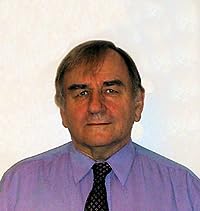 I, John was born in Northern England, Shelia hails from Louisiana in the US. We met over Internet in 1997 and immediately were struck by our common tastes. We liked the same music and books, shared the same views on life, had a common interest in science and technology and liked fiddling with gadgets – especially computers. We even went shopping on the same day and bought the same colour toothbrush.

Shelia and John met in person in December 1997. The plan was for Shelia to stay for up to six months but UK immigration had other ideas. They allowed her to stay just one month. By the end of the month they knew their future was together. John joined Shelia in the US in April 1998 but disaster struck again. He found himself stranded, with little money or a means to return to the UK. Since the UK would not let Shelia live in the UK and the US would not let John stay in the US they ended up in Canada where for three years they struggled to make ends meet by building Web pages on the computer they bought.

In 1999 they married and in 2001 they returned to the UK after finally getting Shelia a residence visa. They lived in London for six years but finally returned to the North to pursue a career in writing.

What inspires you to write?
Technology, science, medicine and an awful feeling that if we don’t do something then humanity is doomed to go the way of the dinosaurs. It’s inevitable that sooner or later the Earth will face another ELE – Extinction Level Event. Our series is based on there being a major asteroid impact with Earth in the Year 7141. Too big an asteroid for Bruce Willis to fly up there and blow it up and so far off in the future that everyone thinks ‘It’s not my problem – my descendants can solve it.’ That’s what the next generation will think, and the next… until it’s too late to do anything about it. But what if mankind became immortal through genetic engineering? Then it would be our problem. If that seems far fetched then you are not keeping up with genetics!

Tell us about your writing process.
I do much of the research needed for ‘A Vested Interest’, write technical bits, and, after thinking about it for a year wrote the original ending. Shelia translates my ‘technical manual’ into fiction friendly English, adds the romance and much of the humour. Together we work on the idiom, spelling and grammar differences between UK English and US English.
We are constantly amazed by the way real life technology catches up with our fiction and by the way that the story seems to write itself. We write without an outline. We read technical journals which give us ideas, write a story and somehow it joins itself together and seems to fit an earlier part as though we had foreknowledge of it.

For Fiction Writers: Do you listen (or talk to) to your characters?
Like actors who immerse themselves in the role they play we try to do the same with our characters. It’s easy to play the hero but the protagonists have to have a motive behind their actions. Do they simply lack empathy? Is it selfishness? Do they believe they are the ‘good guy’ or do they just get a kick out of being evil? It’s not enough for them to be nasty they have to have a reason. Minor characters can’t be ignored either. They may be doing the bidding of others but they should be real people with their own hopes, feelings and failings.

What advice would you give other writers?
If you want to write – just do it. Write your story. If you get stuck then write a different part. Develop and change it. Once you have a complete plot then the easy bit is done.
The next bit is the editing – much harder. Some people may have to seek the help of professional editors to do this. Get a brilliant book cover because a book is judged by its cover. Again seek professional help if needed. The same goes for formatting a print/ebook.
Finally comes the hard part. Get your book out there and promote it. Unless you ‘know someone’ or have the luck of a lottery winner, don’t expect overnight success. It may take years of hard work. That’s where most authors give up. Keep at it. Keep developing your craft. Keep writing.

How did you decide how to publish your books?
We were lucky enough to have the research skills, grammar skills, graphic skills and the formatting skills. We quickly found that epublishing was a more instant route to take and were determined to do it all ourselves. We’ve published in both paper and ebook formats and achieved some success. Had we followed only the conventional agent/publisher route we wouldn’t have progressed so far.

What do you think about the future of book publishing?
There will always be those people who ‘prefer the feel and smell of a paper book,’ so the future of the conventional publishing industry is probably secure. Their market is shrinking though and those who don’t produce an ebook version face an uncertain future. I’m more concerned for the small book store though. They have to find a way of making money from epublishing. Personally I’d like to find a book store where I can browse paper books, have a coffee and buy an ebook version which is downloaded instantly to my reading device. I don’t want to have to wade through mountains of poorly written ebooks to find something worth reading.

What do you use?
Co-writer, Beta Readers

What genres do you write?
Technothriller, romantic suspense