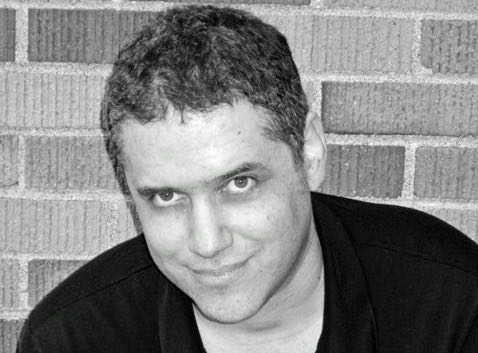 About Jim Snowden:
Jim Snowden was born in Santa Monica, CA in 1971. As a kid he moved around a lot, spending time in New Jersey, Cleveland, Houston, Los Angeles, and small towns in Utah and Washington State before graduating high school. He started out as a physics major at Lawrence University, but quickly discovered that his passions lay with the arts, so he switched to drama. He sold his first short story to Pulphouse magazine in 1992. He’s since written two novels, Dismantle the Sun and Summer of Long Knives, as well as novellas, short stories, and plays. His work has won the David Guterson award, the first prize in the 2015 Bill and Peggy Hunt Playwright’s Festival, and a spot on StorySouth’s 2004 list of notable fiction. He lives in Bellevue, WA with his sweetheart, Venice.

What inspires you to write?
The chance to create an exciting situation and play all the characters in it.

Tell us about your writing process.
I like to start with the last situation of the book, then I think backwards to the open. If I think what I have might play and hold my interest, I write a short outline, roughly what you’d see in the story synopsis of a movie or TV episode on Netflix. The rest is writing and revising.

For Fiction Writers: Do you listen (or talk to) to your characters?
I do play every side of their conversations, trying to get the scene right. I never speak to them author-to-character. I’d feel silly.

What advice would you give other writers?
Two things: 1) Get used to the idea that, for much of your career, the only person who’ll care about whether you’re writing is you. 2) Don’t write just for money or just for critical acclaim/awards. Instead, think of your work as trying to earn a spot in the long conversation humanity’s been holding with itself since writing was invented. That’ll help you feel much more neurotic about it.

How did you decide how to publish your books?
My mentor steered me toward Booktrope, back when it was called Libertary Press. They’re a hybrid publisher. It’s gone okay, though I may look to go traditional for my next book. (Literary fiction released outside of traditional publishing is hard to market.) As for advice, I’d say keep pushing on doors until one opens. If one doesn’t open, cut your own door out of the wall. There’s no one way to succeed in this business. It’s a process.

What do you think about the future of book publishing?
The people who have cogent-sounding answers to that question are usually selling something. I’m reasonably confident that there’ll always be books and readers. The challenge is in matching books with readers in this incredibly noisy and crowded marketplace. (300,000 new books come out every year. Who could review them all?) I don’t think anyone’s come up with a decent sorting mechanism yet. But I hope someone will, and I hope Amazon doesn’t gain exclusive control over it.

What genres do you write?: Literary, Historical, Thriller