You are here: Home / Interviews With Authors / Interview with Author – Jenny Hayworth @JennyHayworth1 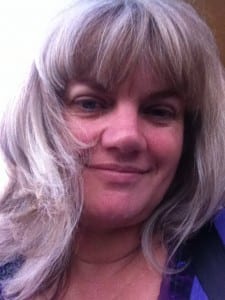 Author Bio:
Jenny Hayworth (1965-) was born in England, emigrating in 1968 with her parents to Australia when she was only 2 years old, and then moving to New Zealand at the age of 9 years. She returned to Australia in 1997 and has lived there ever since.

Her first book, a memoir, Inside/Outside was published in January 2014 by Createspace. She lives with her husband, who is also a writer, in a blended family with 3 of their teenage sons still living at home and 3 adult children living away from home, now making their own way in the world. She also shares her space with 2 dogs, 2 cats and 4 chooks, and proudly shows off her permaculture food forest and perennial garden she has created in her backyard.

Jenny completed her Bachelor of Science, majoring in Psychology in 2010, and currently works with prisoners. She was in the cult-like religion known as Jehovah’s Witnesses for over 30 years, after her parent’s joined when she was only 5 years old. After she left, she was announced as “disassociated” and was treated as if dead by her mother and all her friends who remained in the faith. She is well equipped to offer support and share her story with others who have experienced shunning and estrangement from their families due to religious fundamentalism. She is an advocate for those who have experienced child abuse and are trying to recover as adults, and also has a passionate interest in advocating and supporting refugees.

What inspires you to write?
When I was at primary school my teacher in Grade 4 wrote on my report card that I “was gifted at writing” and should be encouraged. I never saw myself as a “writer” but I had never stopped writing since school days but it was all in journals and diaries for my own records and often on scrap bits of paper that I ended up throwing away. My writing sustained me for years as a way of putting thoughts and feelings on paper that I could not express outwardly or that I could only experience inside of me in my fantasy world. Writing made more real what I had kept hidden inside of me when I first started to actively write down memories that I had not told anyone about and I was actively trying to heal myself emotionally. Now I have completed my memoir I have an urge to write down real stories about real people who may feel they cannot write down their experiences themselves but have an important story to tell.

My children were my inspiration to initially start writing my memoir. I wanted them to understand, when they were adults, why we weren’t in contact with many in their family, and why I had made the decisions that I did that changed their lives. It became much more than that as I neared the end of the memoir. It became important to encourage and support others who have had similar experiences in life, or to help ones understand who may not have had experienced the same.

At this point in time it has taken me 6 years to complete my memoir and I am not actively engaged in writing another book at present. However, I am occasionally writing articles for my husband, who runs a website dealing with topical web based issues, as well as local projects I am involved in with the local writing club I belong to. Our town was recently flooded and our group is editing stories that local people contributed about how the trauma of the recent flood affected them. The goal is to release the stories in book form midyear and this will be available for purchase for local community with proceeds to give ongoing help to flood victims. I have ideas for books I wish to write in future but I have confidence that when I am ready to launch into my next book that the idea will “find me”.

Tell us about your writing process.
I just start writing. I do not worry about beginning, middle or end. If I have an idea or concept then I just free write until I can write no more. Later on, I will edit and change things around. I will focus on paragraphing and grammar and spelling and “introductory sentences” and conclusions etc.

I find if I try and think about all these things at the time of writing it interrupts the creative flow and “boxes me” into a particular line of thought and doesn’t allow for free flow of ideas. I cut out a lot during editing as I focus on the “theme” or main idea I am trying to get across but this does not worry me as I usually have plenty of material to “cut down” and work with.

Sometimes I found during writing my memoir that I would wake in the middle of the night after writing a particular section of work and the sentence or idea I needed would be in my head and I would have to get up and write it down. I keep a notepad next to my bed for these moments, so I can go back to sleep, and not lose the thoughts, and these are often the most powerful sentences and chapters I end up writing.

What advice would you give other writers?
Just write. It is important during the editing process to think about who your audience is going to be but at the time of writing it is important to get into the flow and to get the ideas down on paper. If you love it, then just do it. Do not agonise over every word, or worry about the beginning or ending. Just write. All the other things can be worked out and refined during editing. You will find it easier to cut down, edit, or add, once you have material in front of you. That is my advice.

How did you decide how to publish your books?
Money was a consideration but editing was important and a good cover was important. I used createspace for both. Their prices were reasonable compared to others in my area and I have no complaints with them. They were efficient and professional and easy to communicate with. The main thing is they got back to me within the timeframes they said each time I had a question as living outside of USA I could not just pick up the phone and speak to someone whenever I wanted.

What do you think about the future of book publishing?
I think that independent publishing and digital publishing will keep progressing, interactive books and sites where standard and quality of books to be advertised will increase in number (eg 50+ 5 star reviews before allowed to advertise your book on them).

What genres do you write?
memoir, inspirational, true life, spiritual