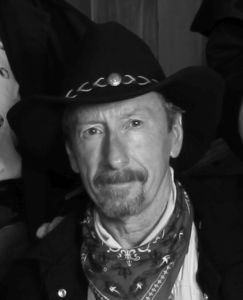 About JD McCall:
J. D. McCall grew up in Kansas during the time when Westerns were king on television and at the movies. Living in a state that was home to such places as Abilene, Dodge, Wichita, and many other of the wickedest cattle towns ever found in the West, the author was never far from Kansas lore, which included the legendary figures of Earp, Hickok, Masterson, and Cody. Not surprisingly, he has retained a great affection for that part of American history which was once the Old West. Born too late to be a cowboy, Mr. McCall makes his living in this modern day as an industrial hygienist in the field of occupational health and safety. He continues to reside in the city of his birth, Ottawa, with his wife and three children.

What inspires you to write?
I started on my first book because I was inspired by a photo. The story which resulted was meant to amuse myself and a friend of mine. After I finished it, I got to thinking about the possibility of publishing it, I decided it needed a companion story to wrap it up. By that time I sort of got enamored with the idea of putting words together to create just the right atmosphere and so I wrote my second novel, South of Rising Sun.

Tell us about your writing process.
My method for writing is is pretty simple. I start with a basic plot idea and come up with the climax; then I start the story and write toward the ending. It leaves plenty of leeway in the writing process for things to pop up spontaneously that would have escaped me had I tried to plot out every aspect of the story. Situations and characters seem to flow naturally out of that writing process. Doing it this way tends to keep me from becoming so attached to any preconceived ideas that I am unable to turn loose of them should they become awkward or box me into a corner.

For Fiction Writers: Do you listen (or talk to) to your characters?
I wouldn’t say I talk to them, but when putting together a conversation between two characters, their interchange seems to take on a life of its own and suggest thoughts and ideas without much effort. I find writing dialog much easier than writing the narrative. I laugh at that little irony because I am not the greatest of conversationalists in real life and rather quiet around other people most of the time.

What advice would you give other writers?
Learn as much as you can about the craft and then examine your own work, looking for specific ways in which what you’ve learned is expressed in your writing.

How did you decide how to publish your books?
I had no idea of publishing when I first sat down to write. As I mentioned, I first started writing to amuse myself and a close friend. He read it and said, “This is publishable.” When I mentioned to my wife that no one else would be interested in reading my story, she replied, “You don’t know what other people might like to read.” That got me to thinking about the idea of publishing, so I shopped around and a small indie publisher, Western Trail Blazer, decided it was good enough to publish. And that was that!

I would tell others to submit their stories to agents and publishers first, and then think about self-publishing as an option. Simply because your idea or novel finds no takers doesn’t mean it isn’t good. Sometimes it simply doesn’t fit the publisher’s needs or they don’t see the potential to sell a lo sell enough copies to take a chance on.

What do you think about the future of book publishing?
I’ve never been good at prognostication, so I hesitate to speculate what may happen. I think as new generations are added to the population, ebooks will continue to claim more market share, but I don’t believe print will ever fall into oblivion. I do think self-publishing will gain more respect as long as self-publishers spend the time and money to get some proofing and editing done before they publish. A good cover designer is also a wise investment.

What genres do you write?: Western