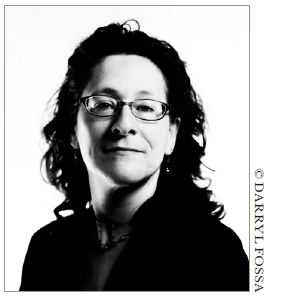 About Holly Caster:
HOLLY CASTER writes an entertainment column for The Nyack Villager, has written dozens of articles for employee assistance websites, and is the Editor of two journals devoted to pain management education. She is hard at work on her next novel Anne/Island/Whales. Ms. Caster lives in the lower Hudson Valley Region with her playwright husband Tom Dudzick and their two cats Alfie and Bill.
Ms. Caster knew in 9th grade she wanted to be a writer after receiving an A+ on a paper about 1930’s actress Irene Dunne. That early triumphant high hooked her, and she’s been writing ever since. She grew up in an apartment full of books, with a mother who read more than cooked, a father who wrote for a living, and a sister who grew up to write for a living. She married a successful playwright, and gave birth to two children who grew up and are writers. Her earliest memories involve Dick & Jane, red and blue fish, magical wardrobes, and Captain Nemo’s submarine. She watched stories in her head and eventually wrote them down. (Cape May, her first novel, evolved from a mental picture of two people on a beach silhouetted against a star-filled sky.) Ms. Caster spends too much time watching films, from the 1930s through the present, would rather be in an art museum than almost anywhere, and would consider her perfect day spent in a European café with coffee and a book, resting her feet after being dazzled by Kandinski. She writes in her almost nonexistent free time, and considers herself blessed to work with words, whether her own or someone else’s.

What inspires you to write?
I almost have to write. I have scenes in my head, and characters living their lives for my entertainment, but they want to come out and be read by other people.

Tell us about your writing process.
While I’m attempting to outline my next book, my current book, Cape May, evolved from the middle, from a scene I saw in my head, almost like a movie. I liked the scene so much I wanted to know more and wrote outward. I don’t feel I have that much control over my characters. They tend to do what they want to do. As I have a full time job, I write when I can. I write better surrounded by other creative people, so my writer husband or my writer son and I spent a lot of time at tiny tables in cafes.

For Fiction Writers: Do you listen (or talk to) to your characters?
Yes I both listen to and talk to my characters. Also, in order to write the most realistic dialogue possible, I read anything in quotes out loud. “Proper” writing is not conversation, so even though a sentence may read well or look beautiful, it may not be how people really talk.

What advice would you give other writers?
Be like Nike and just do it. Remember that possibly every single sentence you compose will be re-re-re-re-re-rewritten, so don’t dwell on perfection first time around. Just get it down on paper and make it better later. The cliche is true: write what you’d like to read.

How did you decide how to publish your books?
Although of course I originally wanted a traditional agent and/or publisher to gobble me up, I realized that it’s all about opinions: an agent’s opinion is just an opinion, whether they like you or not doesn’t make your book good or bad. I chose self-publishing to have some additional control, to get the book out there without spending all my time trying to find an agent. I think indie publishing is the future.

What genres do you write?: fiction, nonfiction, romance, self-help