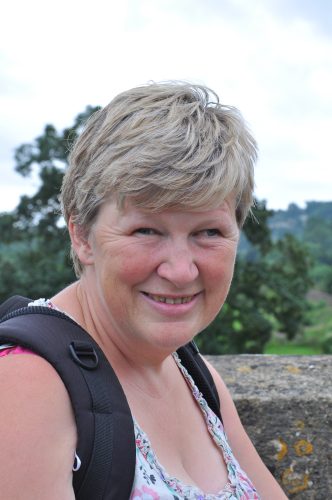 About Fil Reid:
I live on a canal boat in the south of England with my husband and our Romanian rescue dog, Bella, and our elderly cat. We’ve been on the boat for ten years now and before that we lived in France where I learnt to speak fluent French pretty quickly.
I was diagnosed with Asperger’s Syndrome (High Functioning Autism) after two of my now grownup sons were, and that explained a lot to me, especially my life long love of horses and my obsession with all things Arthurian.
My third book in the six book series 'Guinevere' will be out on the 31st of May. This one is called The Sword.

What inspires you to write?
I've been writing since I was five years old and my parents bought me a Petite Children's Typewriter. Children and life have got in the way a bit but since then I've barely stopped. I am driven to sit and write for hours on end. The inspiration for this series of books came after a visit to Glastonbury Tor in Somerset where my husband took some photos with infrared film loaded of the Tor in the distance. When he developed the film we realised that in the sequence of four shots the tower on the top was fading and then disappeared. I wondered if the camera lens had caught a view back into the time before the tower stood on top of the Tor and what would have happened had we been in it when that happened. So my idea for the Guinevere series was born.

Tell us about your writing process.
I don't plan anything other than having a vague idea in my head. I sit down with a blank screen and just write. I see the action in my head, hear the dialogue and just write down what happens and invariably it seems to work out fine. I don't stop until I have all of the first draft written, but I do make notes about things I think would fit in to earlier chapters as I go, then I leave it for a bit. Then I got back over it to revise each chapter and add in the things I thought of as I went along. That usually makes the story longer. Then I do a polish and it's ready. I don't think I could ever be an outliner. I love the spontaneity of not planning anything. Although I have to admit I knew exactly how book six of my series was going to end right from the start – just not how I'd get there.

For Fiction Writers: Do you listen (or talk to) to your characters?
I listen to their voices but don't talk to them. They're all very clear in my head from the moment I start typing. I feel like I'm there with them, inside their heads, feeling what they feel.

What advice would you give other writers?
Join Critique Circle – an online community of other writers where you can post your work and have them read it for you in return for you reading their work. I did and never looked back.

How did you decide how to publish your books?
I queried so many publishers and agents they must number over 100 now, and I entered competitions, and in the end, I won one, and the prize was publication.

What do you think about the future of book publishing?
I think there are too many self published books coming out and swamping the market. Some of them are undoubtedly very good, but they are few and far between (and some traditionally published books are not that good either) and it's very hard for any author to shove their nose above the water and get noticed. I'm not sure self publishing should be so random – anyone can publish anything, and that's not always a good thing. I suspect it's here to stay, and for some lucky ones it will work, but for the most part it won't, and many people will continue to be exploited by vanity presses offering to do all the work for them at exorbitant prices. I don't think it will change. There are a lot of sharks out there.

What genres do you write?: historical romance fiction (published) and hoping to publish children's and YA