You are here: Home / Interviews With Authors / Interview with Author – Ernest Gordon Taulbee 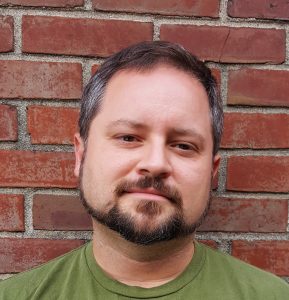 About Ernest Gordon Taulbee:
I grew up in a small town in Eastern Kentucky called Salyersville. I received both a Bachelor’s and a Master’s degree from Eastern Kentucky University. Upon completing my MA I moved to Louisville — where I have lived most of my adult life.

Love of reading and writing has been a theme in my life. Through the decade and a half since I finished his MA, I have worked a variety of jobs, from populating a cubicle in a large corporation to making and selling mead. Throughout my whole life, writing has remained my singular professional and artistic passion.

The thesis for my MA was the first 100 pages of a novel. I would complete that novel in the months after finishing my graduate degree. After additional months spent proofreading and editing, I submitted the manuscript to small publishing houses and select agents who considered literary fiction. The stacks of rejections letters became less painful, when I received an email from a small, art house, stating they would like to publish this novel. That joy was squashed about a month or so later, when the publishing company informed me an unexpected financial situation would cause the publishing house to close.

I would continue to write short stories and outline for longer works over the next few years, until I was struck with the idea for what would become his novel, A Sibling in Always, while waiting for the bus.

Once the manuscript was complete, I continued to write prose and to submit the novel for consideration by small, non-profit houses.

After a year and a half, I decided to join the do-it-yourself culture that had influenced much of the books, music, and art I had come to admire.

I believes art, including fiction, is a vital part of society, so — if you are not going to produce it — appreciate it and try to improve it.

I stil live in Louisville, Kentucky with my wife, Tina, and our two daughters

What inspires you to write?
I remember learning to read and being captivated by the words on the page. I no that may sound like an over used statement, but — for me — it is sincere. I was a shy and introverted kid, and writing became a refuge for me. My writing assignments in school were heaped with praise, and I can still remember my teachers reading my work to the class. It just stuck, and I still do it.

Tell us about your writing process.
I write fast and edit slowly. I tend to put out three or so thousand words when I sit down, and I will typically edit as much of half of that out. It is something I can do with distractions as well. I wrote much of my novel A Sibling in Always with two little girls causing chaos within earshot.

I tend to keep ideas in my head for a long time before I write them down. For example, the original idea for A Sibling in Always came to me in 2008, but I wouldn’t complete the first draft of the novel until 2015.

For Fiction Writers: Do you listen (or talk to) to your characters?
I have on-going conversations with my characters. I have a character, Mason Beel, who has been with me for about 15 years. I would open email accounts in his name, and we would communicate back and forth. He’s mellowed out over the years. In his 20s he was quick the acerbic one, now he is a bit calmer and tends to think before he talks.

What advice would you give other writers?
Two things I would recommend.

1) Stick with it. Sit down and write. Do it at least five days a week and try to produce at least 5,000 words per week. When you edit, question every comma and the word “that” every time you see it.

2) Keep your skin thick. I submitted to small, independent publishing houses with the hope I would get real responses and suggestions. All but one or two of them rejected with form letters. I received more thoughtful responses from literary agents to be honest.

I thinkthe future writing and the literary arts should decided by writers. Take a few minutes to read some articles about writing. You will find most of them are written by editors, and the vast majority of them are about what writers do that turn off editors. Rarely do they talk at length about what writer do that is “right.” I understand it must get monotonous and boring to read, read, read all day. I don’t consider this an excuse. If being an editor takes away the love of reading, then stop doing it for awhile. It is not a writer’s fault that you are bored with your work. I

How did you decide how to publish your books?
I spent a year and a half trying to get my manuscript published with no luck. After every rejection, I would read the manuscript. I have read my novel at least fifty to sixty times. During each post-rejection reading, I would be left with a thought about my manuscript, “This has merit.”

Self-publishing is different now. In all honesty, I have always had a bad opinion of it that was fostered in college and graduate school. That bad opinion was driven by the parasitic entity of the “vanity” presses. Self-publishing has changed. Oddly enough, it is the large corporations, such as Amazon and B&N, that have made it possible for writers to publish their works at no cost. I went for it.

What do you think about the future of book publishing?
I really think it will be brought back to writers. I think that writers will be able to reclaim publishing and let it be a relationship between writers and their readers, as it should be. Rather than the sometimes toxic situation where books are dictated in board rooms or conferences.

What genres do you write?: Literary fiction with elements of dark fantasy and horror