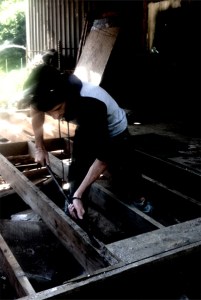 About Eli Nixon:
Eli Nixon lives in North Carolina with his wife and four-year-old daughter. He loves writing and dreads social events because he never knows what to say, and somehow he always manages to give the impression that he either has a slight learning disability or that he’s been drinking, neither of which are true. He likes animals.

What inspires you to write?
I just want to get the stories out of my head. Ever since elementary school I’ve been that “spaced-out” guy who just stares out the classroom window. What’s he looking at? The cars going by? That homeless guy? No, there is no world out there – it’s just a place for your eyes to be when you’re inside your head, spinning scenes and daydreams. I think most artists have that inner space where fiction forms; they just get to it in a different way, and they have a different way of interpreting it. Painters paint it, directors film it, writers write it.

Tell us about your writing process.
I’m purely seat-of-the-pants when it comes to the physical writing, but most of the time a story has been building up in my head for months before I actually sit down to type. I’m a daydreamer, and that strange half-aware space is where most of my ideas come from. I have an embarrassing number of files on my computer that have a title and a page or two – sometimes just a first sentence – which I jotted down in that shazzam moment when an idea first hits me. But it’s there, and that’s the important thing.

A day, a week, a month later, when another flash comes for that story, I’ll add to it, and pretty soon it’ll be come A Thing To Write, at which point I’ll actually plan to put time into it. That’s when I set goals for finishing it and spend time daydreaming about the characters to get an idea of who they are and how they’ll deal with certain situations.

For Fiction Writers: Do you listen (or talk to) to your characters?
I think I just watch them. Like I said, daydreaming is an integral part of my writing process. Writing for me is like bottling and selling those daydreams. It’s that moment when the real world fades and you’re entirely inside your own head and a scene unfolds before you and you watch your character move through it. I just let them do their thing, then write about it later.

What advice would you give other writers?
Burn through your first draft like there’s no tomorrow. Don’t stop and think about little things like phrasing; just get the story out of your head and onto paper. Second, third, and fourth drafts will make the book worth reading – the first draft is the platform to build that book on. For Son of Tesla, I set a goal of 2,000 words a day for a month – no excuses. Most days, that turned into 3,000 words, and I finished the first draft with three days left to go in the month.

You’ll spend the next few months whittling it, but it’s all so much easier when you know you have a completed story.

How did you decide how to publish your books?
An inbox folder dedicated solely to agent rejections was probably my first clue that I should try a different method. I spent three months after finishing Son of Tesla querying agents, all to no avail. I still get the odd rejection form floating into my inbox now and then from a query long forgotten. They drift in like flakes of snow from a summer sky.

But they weren’t wasted months; I don’t regret trying. Taking the time to research each individual agent and tailor my query to their interests helped me hone the core idea of what my own book was about, and what I believed about it. The process also dumped me into the world of publishing, a dimension that had previously been entirely outside my realm of experience. It was a learning process, and it was only after swimming a mile in those waters that I decided to towel myself off and self-publish.

But I found myself on the shores of a treacherous land: With self-publishing, you have two choices: Pay professionals to handle your editing, cover design, formatting, etc., or do everything yourself.

And if you’re broke (like me), you better start learning. Learn Photoshop, get to know the Chicago Manual of Style better than your own kids, beg friends and family for proofreads, proofreads, and more proofreads. Let the dust settle for a month. Do it all again.

By self-publishing – REALLY self-publishing, accepting nothing less than the quality you’d see from Harper or Random House – you’re subjecting yourself to a hell composed of dimly lit LCD screens, back problems, and sleepless nights. All for the uncertain chance that more than a few dozen people will buy your book.

What do you think about the future of book publishing?
I don’t think I’m alone in predicting that the trend of self-publishing is going to keep growing. The Internet has changed more than the way we consume information – it’s shifted the fundamental core of how things can be done. The entire publishing industry arose because a press was literally the only way an author could get his or her books to an audience. Printing – traditional printing – takes money and resources, it takes time, it takes capital, so it was only natural that companies would form who would foot the bill for this to happen. That’s supply and demand, and for centuries it fulfilled its purpose. But that purpose doesn’t exist anymore.

It’s still a dream of most authors, don’t get me wrong: Get your book to a publisher. But even that dream has already changed. Now, it’s “Maybe a publisher will notice my e-book and decide to publish it.” It happened for Amanda Hocking, right? Why not anyone else? That’s the stage of my dream right now, but I also believe that, sometime soon, the dream will begin to stop at the e-book level. It’s a perfectly viable platform, and it fits like a glove with the era of digitalization of information in which we currently live.

What genres do you write?: Science Fiction, Horror, Thriller, Suspense