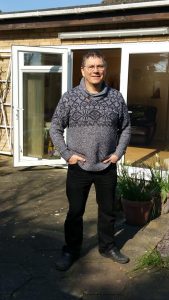 About Des Birch:
My name is Des Birch and I am passionate about writing. I was born in Eire but raised in the UK. I now live in Norwich with my wife Julie.
I actually hand wrote a full length novel when I was in my 20’s, but reading it now, I would never let anybody see it. However, it did show me that there is an end in sight when planning a novel, and this has helped me through countless short stories, technical pieces and especially when I was ready to begin serious novel writing.
To date I have published a book of short stories and five novels (one under a nom-de-plume). My first novel, ‘The Diary of an Innocent’ was published by Pearl Press.
I was fortunate to have won the ePublishing Writers award of Merit for my young adult novel ‘Beyond Dark Waters’ (published by Foundations LLC). I have written the sequel (soon to be released) and I am currently writing the third book in the series.

What inspires you to write?
. It’s more of an obsession than something I have to be motivated to do. Any motivation I need goes towards sticking to writing one thing for a long period. My wife Julie, with Elliott and Elisha, our pet elephants (fluffy) like me to read them a chapter of my YA books on a regular basis, so that motivates me to get some done. This also helps me edit as I go. I am however, motivated to helping and educating young minds, having raised children on my own.

Tell us about your writing process.
This will seem odd to some people. Situations mull around in my head all the time. If one becomes strong enough for me to want to comment on, the basis for a story might be formed. There are many of these infant thoughts, most of which don’t amount to anything. However, just occasionally an opinion does form. The next stage is to decide the best way to get my opinion across. This is when the rough outline of the story is formed. This then goes into a room with many other outlines to see what pops out. When one pops out, it is given more thought and the story fleshed out a bit. This goes into another room with many other ‘fleshed out’ stories. If one of these pops out, it will be as a book, and I will ‘see’ the story from beginning to end. This then sits in a queue, with other book outlines. From that point, a contest commences, in which each one puts forward reasons why is should be written. The weak ones fall by the wayside, while the strong do battle for position. Once, when I was writing a young adult novel, a ‘line’ book crashed through my thoughts, demanding to be written. The demands were so loud that I had to postpone writing the YA book. The book I wrote was so far removed from a young person’s novel., that I published it under a nom-de-plume. Apart from the book I am currently writing, there are three books engaged in fierce battle to be the next in line. This can be exhausting. From a practical viewpoint, I type at my computer, using my right hand, while I hold a fossilised shark tooth in my left.

For Fiction Writers: Do you listen (or talk to) to your characters?
My novels are all written in first person, which allows me to step inside the character and see events unfold from their point of view. I believe that this is the purest form of writing, because it mimics real life. Imagine how different our lives would be if we had information that we have while watching a movie. I get inside the characters, rather than simply talking to them. That way I can simply record my experiences as that person.

What advice would you give other writers?
Decide why you want to write. If it’s for financial gain, take a course in journalism, or learn the art of ghost writing. If you want to write, then write, but don’t expect to be published. If you have to write; if it’s part of your makeup and something you’ve always done, then welcome to the terrifying world of fiction. A world in which anything is possible.

How did you decide how to publish your books?
When I wrote my first novel, I knew little about publishing. I was accepted by an agent in America, who failed to place me with a publisher. After a year, I found a publisher in the UK. this publisher failed to deliver and eventually ceased trading. That was when I decided to self publish. However, I soon discovered that marketing skills were minimal. Therefore I needed a strong team to guide me. Recently I signed with Foundations LLC who keep my on my toes and supply the help and support that I need.

What do you think about the future of book publishing?
From cuneiform writings of old, mankind has passed on written information. From the times when man began to speak, stories have been told around the camp fire. When these two became friends, they formed an alliance too powerful ever to be broken. When I was young they were made out of paper. Now, ebooks are read on a screen. In future times, perhaps we will have debooks: electrodes which connect with the brain, giving direct entry to a story. Whatever the format, there will always be books.