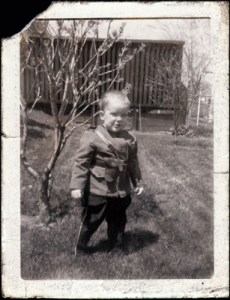 About David Rusk:
After a short career as a Royal Canadian Mountie before the age of five, David was forced to retire when it was discovered most crimes took place after his bedtime and across a street he wasn’t allowed to cross on his own, David led a relatively standard childhood before becoming an entertainment journalist later in life, when thankfully he’d learned to look both ways and his bedtime had been extended and no longer interfered with his work.

Having written about the business side of moviemaking for Canadian trades for almost two decades, David turned to independent filmmaking where he embraced his inner starving artist and discovered the beauty and necessity of Ramen noodles. Having written and directed the independent feature film, Annual Getaway, David has also written over 30 screenplays for various indie producers, having optioned the horror-thriller, Deadly Focus to a Los Angeles-based production company, and having been commissioned by them to write the supernatural-teen-horror, Salem and the historical-drama, The Slave Girl.

Quickly learning the concept of ‘development hell’ and ‘turnaround’, twin evils for any screenwriter in the film business, David used the skills he learned as a screenwriter (the ability to watch any hour-long drama, understand the story structure, and ruin it for everyone by easily picking out who the guilty party is) to return to his first love, books.

Having written both The Merry Pranked and Tripping on Tears, David has renewed his relationship with Ramen noodles, while considering the art of dumpster diving as a means of surviving, while working on his third novel The Marquis Mark, if he’s lucky enough to set up the refrigerator box in which he lives next to a building with an exposed electrical outlet for his laptop.

What inspires you to write?
This is a difficult question to answer, because there is no one definitive thing I can identify that sparked or sparks this lifelong passion. In Tripping on Tears, my most autobiographical piece of writing – although it is a work of fiction – the narrator explains how when he buys a book, he doesn’t read it right away; it could sit for years even. What he is waiting for is that book to call out to him, when it is ready to be read. I approach my reading like that, as well as my writing.

I don’t know why or how, but the stories and the characters just arrive within my mind, and when they’re ready for their story to be told, I tell it. I did enjoy reading as a child, as well as movies, so I was always immersed in one story or another, and I guess, somehow, that developed within me. My inspiration is the characters that appear in my mind, and demand I pay attention to them. It works for me, so I don’t question it – and I hope they never stop arriving.

Tell us about your writing process.
I’m an instinctive writer who writes by the seat of his pants. I know no other way, and so far it has worked for me. A long time ago, I attempted to outline an entire novel, and I did, but didn’t write it as, because I knew what was going to happen, I was bored with it. I find what drives me along is the excitement of finding out what happens next. I may even think, at times, that I know where it’s going and how it will end, but discover I was wrong, the story and characters taking me in a completely different direction. I merely trust our mutual relationship and allow that.

I don’t know if I’d recommend this for everyone. I do start every project in fear that this time it will beat me and I won’t be able to finish it. It’s quite possible that fear is what drives me on. I started this approach as a screenwriter, and had the benefit of working with producers in developing stories. With over 30 screenplays written, and through constructive criticism, I’ve developed my skills – I’m confident in knowing story structure and my abilities. So, along with that fear there is also a certain confidence – a very strange mixture, but one that works for me.

What I think is most important to any writer is being open to where your story can go, even if you’ve planned it out. The real world, and experiences I have there can affect the direction of a story; sometimes just listening to your characters can take you in surprising directions. In my latest thriller, The Marquis Mark, I thought I knew who and what the character, Lewis Hathaway would be, but instead, he developed into something much more interesting that I didn’t suspect, and couldn’t have put in an outline; aspects of his character really surprised me and I thoroughly enjoyed that.

I don’t outline and I don’t do character sketches; I approach developing my characters like making friends; they will reveal to me what I need to know about their character when it is necessary. As I’ve said, not the best approach to writing, but one that works for me. What I believe it all comes down to is just trusting in yourself as a storyteller and knowing that if you’re telling a compelling and entertaining story, it will all work itself out.

For Fiction Writers: Do you listen (or talk to) to your characters?
I do not talk to my characters, but their lives exist in my imagination as I’m writing them, and I believe they reveal to me what I need to know as I’m writing. Whether I’m working on a novel at the time, or between novels, characters are lurking there, either helping me tell the story, or making themselves and their story known, so I know what to write next.

I don’t talk to them, but I guess they talk to me. I remember I was working on a historical script called The Slave Girl while in South America; I’d gotten sick with food poisoning, and as I dealt with that, I got fevered dreams, in which my characters appeared. In that state they became more alive and vivid in my mind. It was strangely fascinating.

We don’t talk in the traditional sense, nor do I ever seek to address them, as in “What would you do next?” but there is a dialogue and a relationship there that is unique to us – even so that when I finish writing a book, and no longer have to think about their journey, it is a sad time, like the loss of a friend.

What advice would you give other writers?
That is simple: Write!

That may seem obvious, but I’ve run across many individuals expressing a desire to write, but constantly complain they can’t find the time to sit down and write. If you want to be a writer, you have to write; you have to find the time. No excuses. Discipline yourself to the task and you’ll be surprised how much you will get done.

How did you decide how to publish your books?
I decided to self-publish because that seemed to be the latest wave in the publishing industry. It can take quite a lot of time to find an agent and publisher, and once you have, it can take quite a long time for them to finally release the book; while you may get more promotion that way, you still have to be released into the jungle of product that is the book store, and still find your audience amongst a great deal of other options. So it just seemed entering the self-publishing market was the same.

My only concern is the lack of confidence readers might have with self-published books. There has to be professionalism there; if you’re asking someone to buy your book, you have to guarantee that you’ve done your homework, paid your dues, and developed your skills to the point that you’re writing at a professional level – at least if you want to stay in the game for a long time.

Now, while I’m self-publishing, I’d also like to one day become part of the book publishing establishment, with an agent and a publisher – I just figure I might have to prove myself first. Unfortunately in this area, I don’t really hold any answers; I’ve merely decided on an approach and moved forward – right or wrong.

What do you think about the future of book publishing?
I really don’t know. I wish I did. The Internet has become such a powerful force and changed a lot over a very short period of time. I do hope book stores never go the way of the video store. One of the great enjoyments of being a reader is milling about the book store for hours checking out titles and finding new and interesting things. It would be a great shame if that ever left the world of book and readers – that’s a powerful relationship.

I think that somehow both traditional publishing and digital publishing will find a way to co-exist – or at least I hope so.

What genres do you write?: Presently I write dark fiction. Tripping on Tears is a dark novel, but is written in a more first-person literary vein. It was a story that I had to tell, as it deals with a lot of the issues we’re dealing with today. In essence it’s a love story – a tragic love story – about what happens when we mere mortals try to control the great unknown of love. Presently I’ve been focusing on psychological thrillers, as opposed to procedurals. I’m very interested in the darkness that lies in the human heart and exploring that. I hope to continue in this vein, but will probably add some horror novels to the mix, as I also believe they help in exploring stories about the human condition. While darkness informs my writing right now and probably always will, I do dream about one day writing a children’s novel that might stand the test of time. I just hope that whatever I write is entertaining – that I haven’t wasted the reader’s time; and while I know I can’t please everyone, if I’m at least skewing towards entertaining the majority, I’ll be happy.