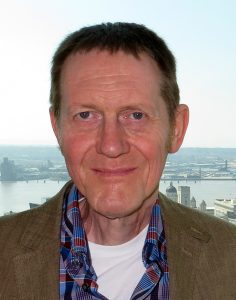 About David Chadwick:
I am a British author whose debut novel Liberty Bazaar was published in May 2015 by Aurora Metro Books.

It is a historical novel set in Liverpool during the American Civil War and is based on real events that happened in the city – and could have radically altered the course of the conflict.

The novel was named by Kirkus Reviews as one of the 10 Best Historical Indie Novels of 2015 and been positively endorsed by Professor James M McPherson, author of the Pulitzer Prize-winning Battle Cry of Freedom.

I am journalist who has spent 30 years reporting on major events and interviewing front-line British politicians and business leaders.

In addition to Liberty Bazaar, I have co-written High Seas to Home, a non-fiction book about the Battle of the Atlantic. I live with my family in Greater Manchester, England.

What inspires you to write?
Without creative writing I might well be dead. I began doing it on medical advice, as part of a successful strategy to overcome alcoholism. The introduction to the movie Trainspotting is spot on: fuelling a chemical dependency is serious hard work. When you stop doing it, there’s an enormous void in your life and the doctors told me it was vital to find a replacement activity if I wanted to stay sober – and alive.

Almost 25 years later, it’s still working – but there have been major complications. Three years after I had my last drink I developed oral cancer in 1992, probably as a result of spending my twenties in a haze of drinking and smoking. Major surgery and radiotherapy cured the cancer – and did nothing to dent my resolve to carry on writing. As if that wasn’t enough, twenty years later – in 2012 – I developed another oral cancer, this time caused by the radiotherapy I’d had for the first one. This was a devastating blow after all those years living a healthy lifestyle.

Nonetheless, the cancer was successfully removed and my prognosis is encouraging. Again, creative writing proved a crucial therapy. Not only did writing a novel demand time and focus that would otherwise have been wasted on worrying, but it also gave me a long term goal to aim for.

So in a very real sense, I owe a great deal to writing fiction.

Tell us about your writing process.
I am a control freak, which makes me an outliner or member of the ‘organised school of writing’, rather than the ‘organic school’ or seat of your pants-type. I do a lot of research and work out a fairly detailed chapter-by-chapter plot outline (as a Word doc) before I start writing. Producing the outline is a chore, but also a great route map. I rarely stick to the detail and sometimes discard big chunks of plot. Some relatively minor characters can evolve into major players, while others are left out altogether. Having said that, knowing the general direction of the narrative is essential because, although I often end up on side-streets, I can always return to the main road.

I write, edit and polish one chapter at a time, rather than producing a first draft of the novel and reworking it – though I still sometimes have to go back and make significant structural changes to a completed manuscript. Sometimes I write chapters in numeric order, and at others I’ll do a strand of narrative that’s out of sequence and involves many chapters, for example from the point of view of one character.

But there’s no right or wrong way of writing a novel – it’s whatever works for you.

For Fiction Writers: Do you listen (or talk to) to your characters?
Not out loud, but I do imagine how they might respond to certain situations. Also, I often hear or read echoes of similar voices on the TV, in movies and newspapers. When a particular turn of phrase grabs sounds good for one of my characters, I write it down. All fiction writers are beggars, stealers and borrowers.

What advice would you give other writers?
Never lose faith but always try to hone and develop your craft. Asking for honest, critical feedback is a great way to do this and creative writing workshops are an enormous help. Academic courses usually include critiquing groups, but there are many community-based writing workshop groups in most areas.

You should also try writing short stories. They are much easier to get published and a great way of experimenting with different techniques. Also, short stories give you instant gratification, without having to put in the many months – or even years – of hard work that a novel demands.

How did you decide how to publish your books?
I was represented by a London agent who tried valiantly but couldn’t interest the big publishers. So I sent the manuscript to some small publishers and almost immediately was offered a book deal. The advance was modest, but my editor was great and allowed me a lot of control over the cover design and marketing.

What do you think about the future of book publishing?
It has never been more fluid. Big publishers seem increasingly risk-averse and self-publishing has really taken off, especially print on demand platforms. However, quality control remains an issue. You can look at some self-published books and get blown away; others have superb artwork for the cover, but the first paragraph is littered with cliché, repetition, clunky language and exposition.

It would be nice to see the break up of the monolithic publishers and the re-emergence of mid-tier or the growth of larger independents. But that’s not likely to happen.