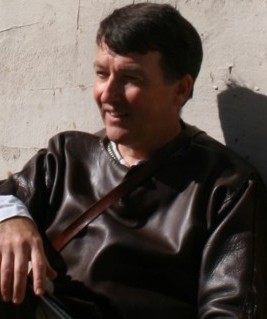 About David Burrows:
David’s books have won a Gold Award on Readersfavorite.com 2010 and featured as Book of the Month on Sfbooks.com so his author pedigree is certainly growing. Sample chapters and reviews can be found at David’s website (see below).

David has lived in Blackpool, Liverpool, Edinburgh and he now resides in the garden of England, Kent. He was a Captain in the TA (2/52 Lowland), an experienced mountain climber and more recently has taken part in Saxon/Viking re-enactment. David’s fantasy writing has benefited from these real life experiences: hours slogging up and down mountains and fighting in a shield wall and although never maimed or killed, David has broken bones on several occasions, so the fighting at times has felt very real.

As with most aspiring authors, David’s writing is part time, with the plots progressing in the evenings and holidays and also during his wife’s pregnancies. At times David’s tales seemed to naturally take the characters into extreme peril, and for months he was left wondering as to their fate. Refusing to rewrite the tale to rescue them he patiently waited before inspiration struck and the story continued at a fast pace to the next cliff-hanger. Suffice to say David’s two sons have now grown up and, as the quill dries, are of an age to read and appreciate this work and to develop their own writing. As to the characters in David’s tales, they too have grown older and wiser; as to whether they survived the tale, only reading the novel will tell.

David hopes you take time to check out his works and enjoy them.

What inspires you to write?
I read the Silmarillion by Tolkien and that really grabbed my creative juices. At the time, there were very few fantasy books about so I really wanted to write my own. My other reason for writing was trying to capture the feeling I had as a seven year old, sitting in a caravan with friends and telling ghost stories until we were too afraid to sleep. Every bump and clatter of branches outside had us jumping in fright. At that age there was a real awe of the unknown that left me spellbound. I loved that feeling of the unknown and fairy creatures/mythical beings. I think we are too wise now and science has taught us not to be afraid of the dark. I hope my books go some way to dispelling that feeling of comfort.

Tell us about your writing process.
I had one idea in mind and I didn’t develop this for several years. I liked the idea which was a scene set in the heart of a mountain in a cavern. Two men were seeking something and one of the men was a sorcerer and he was cruel and vindictive. All around the men voices were gibbering and shrieking into the gloom and both men were terrified and trying to escape. Creating on e scene made me ask many questions; who were the men? What was their relationship and what were they seeking? I started to map out some of these questions with answers and started at a point before the men met. I didn’t plan the entire novel but had a few scenes that I knew must happen. The only problem in writing in this way was that I got stuck on occasions and really didn’t know where the tale was taking me. I had to be really patient and sometimes months later inspiration struck. That was the best part about writing, seeing my own creativity. It was as though the answer was whispered to me. In my books I have shaol which are a guardian spirit. Our link to them is very weak and their existence explains feelings of deja vu. I also liked the unknown and creepy element to a shaol. In my books I develop it further and for some people the link can be a lot stronger. Perhaps it was my shaol whispering the tale to me. Who knows where ideas come from?

For Fiction Writers: Do you listen (or talk to) to your characters?
This question flows from the previous one where I mention guardian spirits. I also wrote a short story “A Meeting of Souls” where one of the characters knocks on my door on a cold and dark winter’s night. I love that tale – it is about Vastra, one of my characters. He is obnoxious but has some redeeming features and by the end of the tale I genuinely felt sorry for him. As an author, I really felt that I created the world I wrote about. I caused hardship and suffering and I do feel guilty about that. Perhaps my guardian spirit did tell me the tale and by writing it I brought it to life — or was it real in the first place. If you believe in infinity then perhaps each tale is a whisper in the wind from some other Universe. In any event — writers beware what you write

What advice would you give other writers?
Be patient. Get genuine reviews and do not seek short cuts. Do not rely on friends and family to endorse your books, otherwise you may end up kidding yourself on your abilities. In hindsight I should have written short stories to build up a readership and I think that route would be very useful.

How did you decide how to publish your books?
I did try to get published but there seemed very few literary agents in the UK. I also found that there was a considerable hurdle in speaking to one, or getting one on board. It took several years and then a friend told me about self publishing. I felt the tale was good enough to be told and have since won a Gold Award on readersfavorite.com so my tales must be good. I have also had reviews from several fantasy blog sites that are very good. I self published in 2010 and this was a challenge at the time. These sites have become more user friendly since and the process is much better now.

I would advise a new author to write short stories and publish these on Wattpad or some other media. Get feedback and build on that knowledge. If you don’t get feedback on short stories then you may be wasting your time with a novel. Short stories should get you feedback and should help develop you as a writer. You will also have a fan base for when you do publish a novel.

What do you think about the future of book publishing?
I think it has become very hard to market books. My sales were excellent in 2011 and 2012, but Amazon/Kindle now allow authors to give away free books and my sales have been very hard hit since then. I own a Kindle and I have downloaded so many free books that I will never have to buy one ever again. I also can’t remember which I have started and given up on, which I have read and which I haven’t. If this doesn’t change then I think there will continue to be a glut of books.

What genres do you write?: fantasy