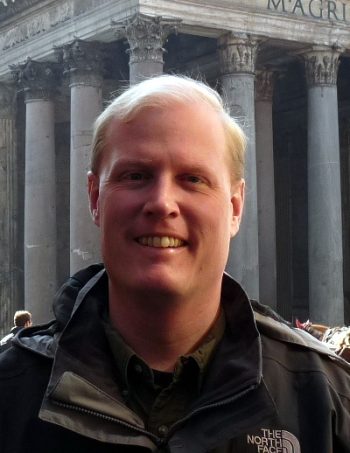 In addition to his novels, Dave is the author of Snood, Snoodoku, Snood Towers, and other computer games. Dave first published Snood in 1996, and it became one of the most popular shareware games of the early Internet. His most recent project (other than writing) is Doctor Esker's Notebook, a puzzle card game in the spirit of escape rooms.

Dave taught geology, environmental studies, and computer programming at Guilford College for 24 years, and he does improv comedy every week at the Idiot Box in Greensboro, North Carolina. He’s also played the world’s largest tuba in concert. Not that that is relevant, but it’s still kinda cool.

What inspires you to write?
The best part of writing for me is hearing that somebody spent some time with my characters and my stories and came away from it having enjoyed themselves. That is tremendously empowering.

Tell us about your writing process.
I'm very much a seat-of-the-pants author. I never go into a book knowing the ending, or even knowing what the plot will be like. I let that unfold as I write and as I get to know the characters. Often, I don't even know how a chapter will end when I start it, and I have a tendency to throw in twists and new characters that I haven't planned on. Obviously, this creates some chaos, but it's really fun, and it helps me be creative. Usually about halfway through a book, I'll see where it's going to land, and I'll start bending things toward reaching that destination in a satisfying way. Then, during my editing process, I can go through and weave the whole thing together better, removing any loose ends or, better, weaving them into the story in ways that are satisfying and consistent.

For Fiction Writers: Do you listen (or talk to) to your characters?
I don't go through that exact physical exercise, because I think I'd feel pretty self-conscious in my basement talking to myself, but I do try hard to get into their heads and figure out who they are. That's the key to having them speak and act in a consistent and real-seeming way. If you know them, know what they care about and how they view the world, and know their voice, then the dialogue almost writes itself.

What advice would you give other writers?
So, the thing I’ve learned the most over the past 3-4 years of intensive writing is that, for me, writing every day is the only way I’m productive. I need to do an hour, at least, and if I get interrupted or skip a day, the project can stall out hard or even fail.

It’s not so much the progress I make in that hour – I could always write two hours the next day to make up for it. What the daily writing does for me is that for the rest of my day, when I’m not writing, I’m still thinking about the next bit – what happens next? How will they react? What’s a cool new thing to throw in? How can I resolve what just happened?

When I don’t write daily, I lose that focus on the story, and it’s really hard to get back on track.

How did you decide how to publish your books?
I got a children's book published through a publisher back in 1997. When I started writing novels, I looked toward traditional publishing first, but I found it to be a dense, competitive market with a lot of gatekeepers. I had trouble getting agents interested in what I was doing. With my background in self-publishing my computer games (e.g. Snood), I was used to doing the extra work getting my stuff out to people who would enjoy it, and I'd researched the self-publishing world a lot and knew it was thriving and viable.

I figured it would be more challenging, but also more rewarding, and it would allow me a degree of control and hands-on work that I knew I would enjoy, and perhaps more revenue than a much smaller royalty from a traditional publisher. So, I went with self-publishing for my first five novels, and they're finding an audience who appreciates them. I'm open to traditional publishing for future books if the opportunity arises, but I'm happy with what I'm doing now.

What do you think about the future of book publishing?
I think it will continue as a hybrid, with a strong traditional publishing side and a thriving indie publishing side. There's always a place for the kind of production, advertising, and distribution that traditional publishing provides, and they do provide a filter (albeit an imperfect one) that keeps those books more uniformly high quality than they sometimes are on the indie side. However, the Internet has succeeded at removing a lot of barriers in many spaces, and that's let many more voices be heard. As readers learn more about the indie world and find good ways to navigate to books they'd enjoy, I think indie publishing can only get stronger, and the opportunity it provides individual authors is really valuable.

What genres do you write?: Fantasy, Sci Fi, Mystery, Thriller