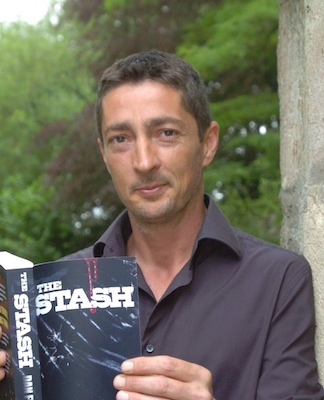 About Dan Fletcher:
Dan Fletcher was brought up in Africa and has lived in South Africa, Swaziland, Zimbabwe and Nigeria, as well as Canada, Spain and the UK.

Author of DAWN OF DECEPTION and THE STASH, his love for thrillers started at an early age due to the lack of any TV. Dan currently lives in Wiltshire with his partner Clare and their 6 children.

A note about the David Nbeke Series:
Dawn of Deception is a book that I spent years researching and writing that delves into the world of international poaching syndicates and political corruption in Kenya.

The historical background of ethnic cleansing and the criminal methods employed are accurate and well documented.

David Nbeke and the other characters are fictitious, although the evil mastermind Maliki is based on someone I met in Nairobi who had failed the lion hunt, bore the scars, and been ostracized from his tribe – unlike Maliki he was a warm and gentle soul. Although the history gives the characters more depth and motivation this is in essence a high-octane thriller as David Nbeke fights for justice and his own survival.

In the sequel, DIVIDED THEY FALL, David teams up with Clarissa May of the CIA to combat terrorists planning to blow up the American Embassies in Nairobi & Dar es Salaam – due to be released this summer!

I hope you enjoy reading Dawn of Deception and the rest of the series as much as I have enjoyed writing them!

All the best,
Dan

What inspires you to write?
I have always loved reading thrillers and wanted to write books that pick you up and immerse you in a different world. Books are better than film in that you use your imagination to picture the characters and create a personal experience. It is this magical experience that inspired me to write.

Tell us about your writing process.
My first novel THE STASH was written in under 4 weeks and I stayed up for up to 3 days in succession to get it finished. I was driven by the excitement that the words kept pouring out.

In retrospect I realised that I didn’t spend enough time in planning or editing the book, one reviewer described THE STASH as “written by an enthusiastic teenager”, which pretty much describes my mood and experience at the time. That said I still love THE STASH in all its rawness because it represents the realisation that I could write a full length novel – a discipline in itself.

My approach to writing DAWN OF DECEPTION and the David Nbeke Series has been completely different and based on personal experiences and people I met in Kenya. Before writing a word I spent 9 months doing historical research & creating family trees and motivates for ALL of the characters. This makes the characters and the life-threatening situation David finds himself in real to me and hopefully to the reader as well. When the first draft was completed I then spent another year re-writing and editing parts of the book.

Once I start a book I totally immerse myself and become a recluse – I have to remind myself to take breaks, eat and even sleep.

For Fiction Writers: Do you listen (or talk to) to your characters?
Quite often I dream that I am one of the characters, usually David, and wake up with a new idea to be pursued or ignored. I don’t talk to the characters but I do play conversations between them in my head to make sure that they sound authentic.

What advice would you give other writers?
A great tool for me was a website called youwriteon where authors upload the first 3 chapters of their book and have it critiqued by other writers. This gives you excellent feedback at the development stage and the advice and experience of other authors helped to develop my writing. As part of the process you review other writers work and learn techniques from them.

My main advice would be to have a long break once you have written the first draft – I become so immersed in the project that I can’t see the woods for the trees and need 6-12 months to be able to recognise the mistakes.

How did you decide how to publish your books?
Once I had written the first 3 chapters of THE STASH and started to get positive feed back it gave me the confidence to believe that my books deserved to be read.

I sent THE STASH out to numerous agents to no avail and eventually decided to self-publish as an unread book is like an unborn child.

DAWN OF DECEPTION did receive interest from publishers and I achieved the milestone of bagging a top 10 agent and had lunch with various editors. I was offered a publishing deal if I re-wrote the novel to include a westerner as the main protagonist but I refused. The whole point of the series is that David Nbeke is a true African hero who stands up against injustice.

What do you think about the future of book publishing?
For years agents have been the gatekeepers to the closed world of publishing. The eBook and the opportunities for self-published authors is a revolution that I am happy to embrace as it gives indie authors the opportunity to showcase their work.

Being self-published has limitations in that a print on demand book will always be more expensive than a mass produced paperback, which makes it difficult to compete on Amazon and other market places.

I believe that the 2 industries will continue to run in parallel, hopefully with more authors making the cross-over from indie to mainstream publishing.

What genres do you write?: Thrillers mainly and some historical fiction