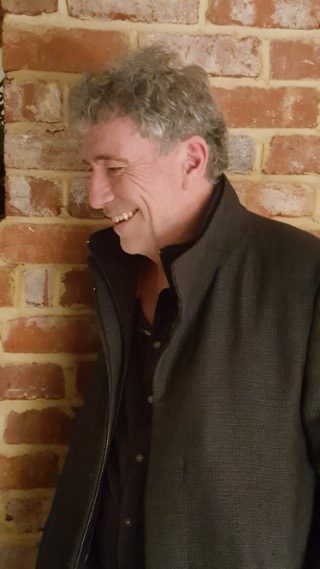 About Colin Falconer:
Colin Falconer writes crime fiction and historical fiction. He has written twenty-six novels which have been translated into 23 languages.

In between leaving school and securing his latest publishing deal, he found time to chase black witches across Mexico, travel the silk road, and occasionally play the guitar in pubs. His only claim to fame from those days is completing all the verses of ‘All You Need is Love’ during a bar fight in the Stella Maris Sailors Club.

After a short stint in advertising he became a freelance journalist. He also worked in radio and television before writing novels.

Last year he signed with Little, Brown for the new Charlie George series. ‘Lucifer Falls’ has just been published and ‘Innocence Dies’ is due for publication in October 2019. His new historical fiction novel, Loving Liberty Levine, is published by Lake Union.

What inspires you to write?
My primary school teacher once told my mother “Your son is a complete dreamer. He’ll never amount to anything in this life.” I still think that was a pretty harsh judgment on a seven year old. But she was right, of course, I was a dreamer. It was my greatest asset.

It was about the time I first read Jules Verne’s Michael Strogoff. To get my hands on it, I had to endure a wet kiss from my Aunty Ivy, but I considered it well worth it.

Every week my Aunty Ivy took the train down from London to visit with us in Essex, bringing with her a collection of Classics Illustrated comics. She must have picked them up in the markets in London.

There were some Beanos and Victors mixed in, but I threw them out. My treasure was the cartoon versions of some of the world’s greatest books. They were the stories and places I had been dreaming about. And so began my love affair with stories.

By the time I was eight I had read Moby Dick, Doctor Jekyl and Mister Hyde, The Moonstone, The Black Tulip and Ivanhoe, was familiar with most of the major works of Alexandre Dumas (Père), Mark Twain and William Wilkie Collins and had even read most of Homer’s Odyssey (although I never found out how it ended because the last page had been ripped out.)

I don’t think that back then Aunty Ivy knew she was giving me primers for my future career.

Tell us about your writing process.
I used to be a pantser which is why I have so many half finished novels in the bottom drawer. Then I learned about structure and life got a whole lot easier.

For Fiction Writers: Do you listen (or talk to) to your characters?
Yes, both. I also talk to our spaniels. (You'd be surprised at their existentialist world views.)

What advice would you give other writers?
Learn the craft. Don't rush to publish. Almost all good writing is about skill and practice, not divine inspiration or innate genius.

How did you decide how to publish your books?
I published most of my books long before the internet age, when there was only one choice. Find an agent. Find a publisher. Feed the kids.

What do you think about the future of book publishing?
Story tellers have been around since humans could walk upright. The method of delivery may change – it should change. The future, in that respect, will be the same as the past.

What genres do you write?: crime, historical fiction