You are here: Home / Interviews With Authors / Interview with Author – Charlie Moore @_charlieMoore 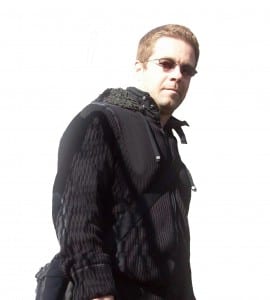 Author Bio:
Charlie Moore was born and raised in Sydney, Australia. He started work on his first full length novel at age 18. When running through final edits for the book, he put it aside; wanting to live and experience some of the adventures his characters were thrust into. He became an accomplished martial artist, winning his first full contact fight by TKO and gaining over 30 medals before retiring from competition. He traveled the globe, got lost in dangerous parts of the world, swam with sharks, jumped out of planes, and became a Private Investigator.

Resuming his passion for writing, Charlie started ghost writing to build and harness his skill, and in mid 2012 “Against the Clock” was born.

Charlie now shares his time between rock climbing with his wife, and writing deadly action-packed thrillers.

What inspires you to write?
The voices, images, stories in my head that I can’t get out any other way.

Tell us about your writing process.
I do a ‘soft’ outline of the book using a great app on my tablet called ‘SimpleMind’. It’s a mind map program that helps with linking one idea to another, and expanding on any point as far as I want to go. So I try to do the outline for the whole book, and that can happen in patches. For example, for Against the Clock, I had the prologue and epilogue outlined before I even looked at Chapter one; so I knew where it started and knew where it ended.. in that way I gave myself freedom to have the story develop as the characters did, but kept true to the core of what I wanted from the start.
With my characters, I just kept thinking about what kind of characters would I want to read about.. I wanted bad guys that I hated, violence that scared me, but also passion that ignited a quiet night at home, loyalty and general goodness that admire. With that in mind I tried to create characters that embodied those qualities. Again I used ‘SimpleMind’ to graph each character, their relationship to each other and key traits for continuity.

For Fiction Writers: Do you listen (or talk to) to your characters?
I definitely listen! But I also ‘feel’ them. When I was writing the sex scenes, my wife had never been so happy 😉 but when I was writing some of the more evil scenes, I had to have a few stiff drinks and watch a ridiculous comedy just to get back to normal. Is there such a thing as ‘method writing’?

What advice would you give other writers?
Write. And keep writing!

It’s the best advice I was ever given. And not to write to be famous, or make lots of money, but to write because you don’t have any choice.

How did you decide how to publish your books?
This was a really difficult decision! I agonized over it for a long while. After talking with several very successful novelists, I decided to go Indie! Being an indie author means I can write what I want, when I want, how I want. I can market and promote in the same way. And every single moment of the day, and into the future, I ‘own’ my work, and my success. To me that is a very rewarding feeling.

What do you think about the future of book publishing?
I think traditional publishers will continue to feel the pinch as more great indie authors choose to stay clear of traditional publishing. I do believe it is getting more difficult to stand out as a great writer, but isn’t that part of the fun?

What do you use?
Professional Editor, Beta Readers

What genres do you write?
action, adventure, thriller, mystery