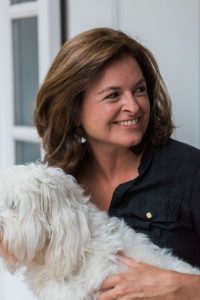 About Carrie Doyle:
Carrie Doyle was the founding Editor-in-Chief of the Russian edition of Marie Claire Magazine. She is currently a Contributing Editor of Hamptons Magazine and has written extensively for Harper’s Bazaar, Town & Country and has also written for Women’s Health and Avenue on the Beach. With Jill Kargman, Carrie co-wrote the film Intern (which premiered at the Sundance Film Festival in 1999), as well as several screenplays sold to Showtime, Paramount Pictures, Nickelodeon Films and the Oxygen Network. Carrie and Jill co-wrote five books together, including three teen books for HarperCollins and two bestselling women’s fiction books, The Right Address and Wolves in Chic Clothing (Broadway Books). Carrie also penned the popular novel The Infidelity Pact (Broadway Books). Carrie lives in New York City with her husband and two children and is currently at work on an animated series for broadcast as well as her new cozy mystery series, the Hamptons Murder Mysteries.

What inspires you to write?
I have always written stories, books and poems since I can remember. My sons are 12 and 14 and I watch them take part in their hobbies and I try to remember what I did at that age and I remember sitting in my room and writing poems in my thin blue spiraled notebooks. I have several of them. There are times in my life where I want to stop writing because I wish I had a more lucrative career! But I can’t. I get grumpy when I don’t write. Some sort of mental endorphins kick in when I work and I am a happier person.

Tell us about your writing process.
For the past three years I have been writing at the New York Society Library. I prefer to face East if possible, it’s a weird feng shui thing, but the quiet room gets so crowded that sometimes I don’t have that option. I see a lot of my friends who are writers there—like Holly Peterson and Sarah Bliss–which is reassuring. When I am there, I write for about 3-4 hours and then I max out.

For Fiction Writers: Do you listen (or talk to) to your characters?
No, I don’t talk or listen to my characters. But I know them pretty well and what they would and would not do. The most important start for me with a character is the name. I am pretty specific about what their name would be. My former writing partner Jill Kargman always used to laugh about this but I always got to pick the names in our books.

What advice would you give other writers?
The best advice about writing that I ever received was from a not very good movie called ‘Finding Forrester” with Sean Connery. He plays a mentor to a young writing prodigy and he says if you want to write, you have to write! Just write, write, write!

How did you decide how to publish your books?
Not to be cliche but it is a new era and the world is moving faster. I believe it is time for publishing to change and that’s why I co-founded Dunemere Books with Liz Carey and Tiffany Palmer. I was tired of waiting around for my agents to get back to me and then to submit books to big publishing houses and then wait for them to decide and then wait a year to publish–it all felt stale by then. We had to take it into our own hands and change the broken template. It’s what TV has been doing with great success. Now when my books are released they feel fresh because they are recent and I don’t have to wait years to let people read them.

What do you think about the future of book publishing?
I think the future is ‘cutting out the middle man’. Traditional publishing is full of giant conglomerates these days. You don’t see many elegant imprints. There are not really any famous editors anymore, whose taste you can trust. I’m not saying there are not editors with taste, but you don’t know about them because they are swallowed up into these giant corporations. Dunemere Books is smaller, and our goal is quality not quantity. We are the friend that you call up and ask what to read next. We know your taste, and we are consistent in ours. I think that’s the future. Smaller, curated, tasteful.