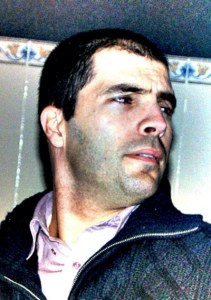 About Bruno Goncalves:
Despite having been born in Portugal, I was one among many Portuguese privileged with having grown up in South Africa. This experience proved to be critical; I now think in English, although I returned to my home country twenty years ago. After finishing high-school, my interest in all things technological led me to the University of Coimbra, where I spent three years studying Physics Engineering and trying to study as diligently as possible.
Despite reasonable results, I eventually felt the need for a different life, and in 2002 I joined the Portuguese Armed Forces as a militia officer of Engineering, where I spent five very fulfilling years serving my country.
In 2007 I became a Police officer, and have since then been working and living in Lisbon in the Departmento de Armas e Explosivos.
In June of this year I became a father for the first time. I have dedicated my book to her, of course.

What inspires you to write?
I have always been passionate about literature. This led my parents to go so far as to “prohibit” me from bringing books home from the school library. There was always a part of me which wanted to write one of those books. The genres ranged far and wide, but if it could capture my attention I wouldn´t let a book go until it was finished.
More recently, it was the intense boredom characterizing the intervals between my patrol shifts which led me to entertain the notion of writing a book. I had no TV, no internet connection, no roommate, no girlfriend, hardly any friends to speak of living in the city itself, and I wasn´t the sort to socialize by my own initiative. I didn´t know it at the time, but those were almost ideal writing conditions for me.
I am more serious about writing now. My country is in crisis, my salary has diminished and my child has been born. My inspiration and desperation have begun to mix.

Tell us about your writing process.
My first attempt to write a book ended at chapter seven. It was at that point that, due to my naturally disorganized mind and the fact that I had been writing from the top of my head, I got lost in my characters and plots. It was hopeless, truly. I gave up for a while, but then I came up with a better story and tried again. I believe I have already made most of the mistakes a writer can make; I have told and not shown, I have mixed up my principle character´s eye color, I have gotten lost in plots so many times that I gave up several times. But mostly, I made no effort to read up on how to write, organize or edit a book.
My organization solution is simple. In the beginning I write a detailed synopsis ( although I keep my options open). In this synopsis, I leave messages for myself and raise whatever possibilities come to mind. If I am inspired I resort to free-writing. That is the general plot. I then write a synopsis for the first chapter to help guide me through it, but once I am writing the chapter itself, I let myself go where the story wants me to go. If this implies changing the general synopsis, I simply make the necessary modifications and continue.
I also use Microsoft paint when I need to make basic diagrams and Excel for timelines (I have been going crazy on Excel lately). I realize that the more I define my future path, the more confident I feel to progress.
I don´t write on a regular basis. Mostly I work, and when I´m not working I research. Much of this research goes into whatever I fancy at the time, but I allow this because much of my inspiration comes from the unusual things I come across every once-in-a-while.

For Fiction Writers: Do you listen (or talk to) to your characters?
I gave a tendency to verbalize my thoughts when I´m focused. I do this most especially when I´m alone, but I´m not talking to my character, I simply am my character at the time. It is difficult to do this when I´m not alone in the room.

What advice would you give other writers?
Giving up was an integral part of my writing experience. The only reason why I managed to publish my book was because I always returned to the occupation after giving up on it (usually armed with capabilities I had in the meantime developed). A person can give up on a story a hundred times, but if he returns a hundred times, the book will be finished.
Also, put your thoughts on what you want of the book or chapter into writing beforehand. If you´re prone to getting lost like me, that might be your salvation.

How did you decide how to publish your books?
Perhaps my lack of self-confidence led me to opt for self-publishing. I reckoned that if my book was not acceptable, self-publishing would be a way to get honest reviews to help evaluate it. At worst I could always unpublish and correct or rewrite the book.

What do you think about the future of book publishing?
The future is uncertain, but it appears that the big publishers out there might want to look into the effect the Kindle movement is having upon the manner in which books are sold worldwide.

What genres do you write?: Science fiction, action&adventure, war